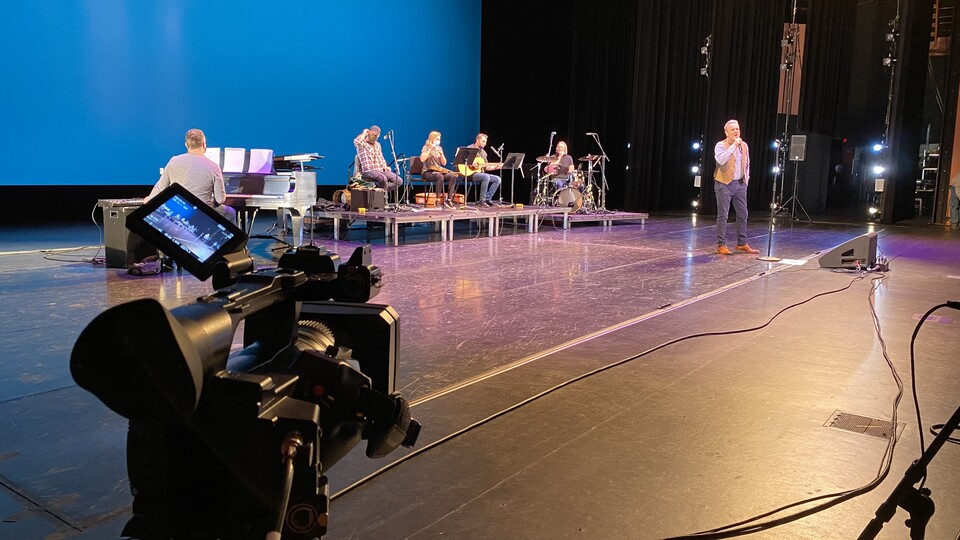 An off-stage view shows one of the five cameras used by the Lied Center for Performing Arts to livestream performances. The venue has been streaming nearly all of its in-person shows since last fall. (Lauren Silverman Durban/Lied Center)

Looking to curb pandemic boredom but still not quite ready to leave the house?

Catching a show at the Lied Center for Performing Arts is now as easy as getting cozy on the couch and flipping on your TV.

The Lied has offered live webcasts of almost all of its in-person performances since last fall. Thanks to a new, high-tech camera system recently installed in its theater, virtual attendees can get a close-up view of the action and replicate the experience of being at a concert or musical.

“Many people have been commenting on how high-quality the video and audio is, and how it’s just like being in the theater,” said Bill Stephan, executive director of the Lied Center. “For our patrons who have wanted to stay at home, this has been a real form of hope and joy in their lives.”

The center started offering online streaming options when the pandemic began last spring. At the time, local Nebraska artists were broadcasting concerts from home using iPads and cellphones. The series was a way to not only support artists who were out of work due to COVID, but keep the Lincoln community connected to the performing arts.

However, with no end to the pandemic in sight, Lied staff began searching for a more long-term solution. After experimenting with a one-camera system in the summer, the center purchased five cameras and a streaming “caster” in August.

“We were fortunate to receive a private grant that funded the project, which was just a huge blessing,” Stephan said.

“The first event that we broadcast was our opening show, ‘NEWSical the Musical,’ in September 2020. That was the first off-Broadway show in the United States to perform together since the beginning of the pandemic. We had over 1,000 people watch that production online, and it was a national audience, so we were thrilled.”

Tickets to each webcast typically cost $20. Camera angles switch throughout the show, sometimes showing a wider view of the stage and other times moving to a close-up shot of performers.

“This isn’t a recording type thing, where it gets edited and put out — you’re seeing what’s live at the Lied Center, which is unique because a lot of performances at other venues are pre-recorded,” Stephan said.

“We like to do everything world-class. The artists we present are world-class, we like to keep our venue a world-class experience, and we wanted this video system to be equal to an experience of attending an event at the Lied.”

The Lied’s innovative approach was recently featured in a New York Times article, “You’re New Here, Aren’t You? Digital Theater’s Unexpected Upside.” The story highlights venues across the country who have adapted to COVID-19.

While he isn’t quite sure what the future holds, Stephan expects the Lied will continue offering webcasts in some capacity once the pandemic is over.

“The world is our audience now. There’s no limitation of geography,” he said. “I think the pandemic has changed the world in that area for performing arts organizations, and as we put programs online, there are no walls and no distance barriers to reach people in other states and other countries. Now that we’ve realized that and we’ve started to develop those audiences and have the equipment to capture and share great performances, I anticipate that it’s a whole new market.”