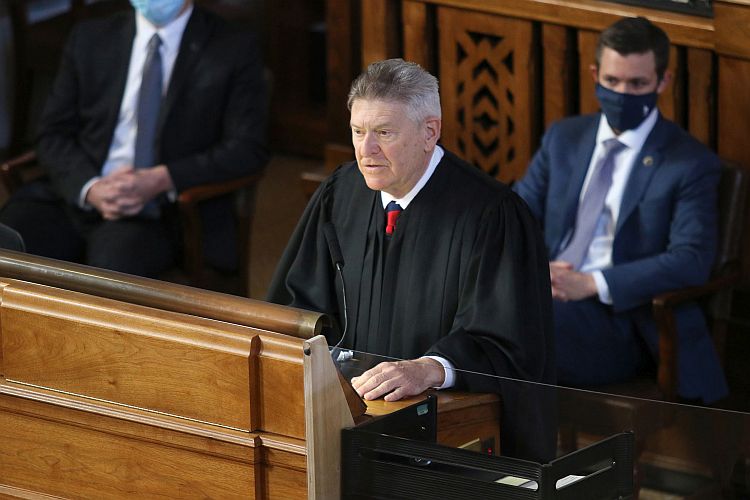 LINCOLN– Chief Justice Mike Heavican discussed the Nebraska Judicial Branch’s response to the pandemic as well as community access to justice initiatives in his annual State of the Judiciary address Jan 21.

“Because of our Constitution’s dictate and because of our courts’ vital role in society, we have taken the measures necessary to remain open safely, providing uninterrupted access to justice,” Heavican said.

Heavican highlighted the steps the Nebraska Judicial Branch has taken to operate safely. According to Heavican, emergency-preparedness planning began in 2019 when the courts hosted a national planning session with the University of Nebraska Medical Center in Omaha.

“Having that opportunity to discuss with experts the potential for a pandemic allowed us to transition quickly when COVID-19 struck,” Heavican said.

“We would not have had the ability to rapidly respond to the pandemic if the courts had not built a strong technological foundation over the past decade,” Heavican said.

The Judicial Branch is also taking initiatives to promote access to justice, civic education and public outreach, Heavican said. It recently began a Racial Equity Initiative through the Access to Justice Commission. The initiative is intended to determine equal access deficiencies in the courts through surveys, a focus group and larger public-listening sessions.

“There is no place in our court system for racial discrimination or inequality,” Heavican said.

The Language Access Program is another important component of providing access to justice in Nebraska courts, Heavican said. The program provided remote interpreting services through phone and video platforms and interpreted 47 different languages over the last year.

“No Judicial Branch program is more important to Nebraska taxpayers than our adult and juvenile probation services,” Heavican said.

Probation is cost affordable and effective, according to Heavican. An adult’s tendency to re-offend has decreased by 17% from 2010, and the numbers in the juvenile justice system have decreased by 18% this past year.

Heavican also discussed the growing demand for public guardian services as the state’s population ages. There is a statewide waiting list, he said.

Even though the pandemic changed the way many Judicial Branch services operated, Heavican thanked the program’s “everyday heroes” in courts, probation offices and the Office of Public Guardian.

“Our court family is essential in every sense of the word. Our courts are safely open, providing uninterrupted access to justice for all Nebraskans,” Heavican said.