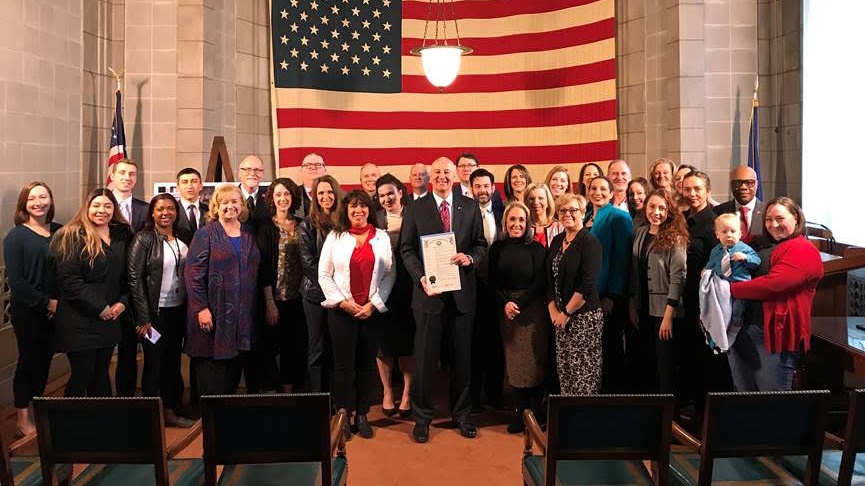 After signing a proclamation, Governor Ricketts highlighted the multi-agency response developed and carried out by NHTTF and its many partners across the state.

“Nebraska has taken an all-hands-on-deck approach to tackling the scourge of human trafficking,” said Governor Ricketts.  “From law enforcement agencies to community groups to members of the media, everyone has stepped up.  Thanks to our team effort, Nebraska continues to raise awareness and make progress towards ending the great evil of human trafficking, which is a modern form of slavery.”

From stronger laws passed by the Legislature to training across the state by the Attorney General’s Office (AGO) along with proactive operations and investigations by NHTTF, a variety of strategic initiatives are effectively combatting human trafficking.  More information about the AGO’s work can be found by clicking here.

Recently the State of Nebraska was given an A grade by Shared Hope International for its effectiveness in combating human trafficking.  Nebraska has made great strides since 2011 when the state received a grade of F.

“Today our office is releasing videos to educate the public in recognizing the signs of trafficking and reporting it,” said Attorney General Peterson.  “We are also issuing a four-year review of the task force which illustrates what can be done when people with widely different roles are unified around a common mission.”

Nebraskans can also express their commitment to fight trafficking by sharing social media banners or displaying a poster both of which are available on the Nebraska Attorney General’s website.  More information regarding how Nebraskans can help stop human trafficking can be found by clicking here.