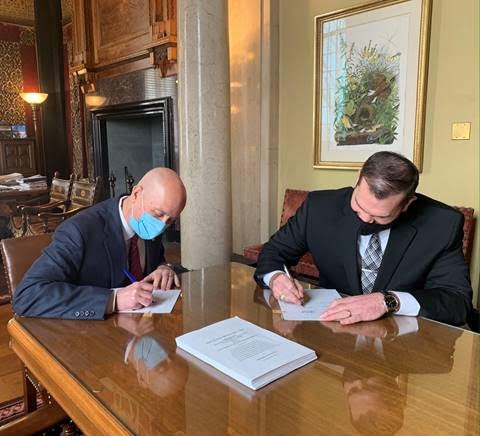 LINCOLN – Thursday, Governor Pete Ricketts and state leaders highlighted a new contract that will govern state teammate compensation for the next two years.

“Thank you to all the interested parties for their great work on finding agreement on this latest employment contract,” said Governor Ricketts.  “This contract reflects the culmination of six years of culture change in State government to become a more performance-based organization.  Culture change starts with our talented and hardworking teammates, and now we’ll be able to provide our team the recognition they deserve for excellence in work.”

Jason Jackson, Chief Human Resources Officer (CHRO) for Governor Pete Ricketts, and the Nebraska Association of Public Employees (NAPE) also issued statements after reaching agreement on terms for a new labor contract.  NAPE represents over 8,000 public employees that work for the State of Nebraska in agencies throughout the state.

“This contract is a win-win for the State and our teammates,” said CHRO Jackson.  “Over the past two years our team has been on the front line of flood relief and pandemic response.  With the pay for performance provisions of this contract, we’ll be in a position to recognize those who are going above and beyond for Nebraska.”

“This contract represents progress for Nebraska’s hardworking public employees and for Nebraska’s taxpayers,” said NAPE Executive Director Justin Hubly.  “A very hard year has highlighted the critical importance of the work of state employees.  The best thank you for front line workers is a strong contract and a commitment to fair compensation.  We appreciate the efforts of the Governor and his team to work with us to secure a path to a brighter future through a meaningful step pay plan and a higher minimum starting wage.”

The new contract is headlined by a merit-based step pay plan.  All job classifications will have a Minimum Hourly Rate, Step 1, of at least $12.00 per hour and teammates on the plan will be raised to Step 1 or to the nearest step above their current hourly rate as of July 1, 2021.  Also, on July 1st of each year starting in 2021, teammates will have the opportunity to advance steps on their pay plan if their performance in the past calendar year has been scored as at least satisfactory by their agency.

Other notable aspects of the contract include the discretion of state agencies to extend the eligibility to utilize the Maternity Leave Donation Program to teammates without approved Family Medical Leave Act (FMLA) leave, and the establishment of Performance Management guidelines on teammate evaluations, standards/expectations, and appeals.

The contract was ratified by the members of NAPE in late December 2020 and is in effect until 2023.  The contract is available by clicking here.