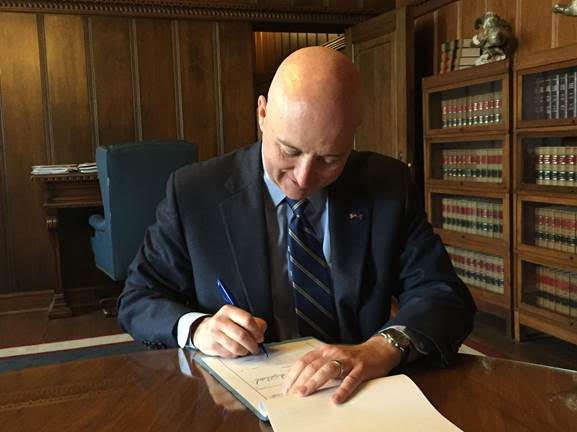 Recently, Governor Pete Ricketts signed LB 6 and LB 138 into law.  LB 6 provides for the spouse or legal dependent of a person on active duty military assigned to a permanent duty station in Nebraska to continue to receive in-state tuition from the time of acceptance for admission for as long as the person remains continuously enrolled, even if the military person retires or is re-assigned to a new duty station.  LB 138 is a license plate bill that provides for additional Military Honor and Support Our Troops plates.

“We are working hard to make Nebraska the most military and veteran friendly state in the country,” said Governor Ricketts.  “Our servicemen and women, veterans, and their families have sacrificed much so that we may enjoy the Good Life here in Nebraska.  We must work to ensure that we honor these brave men and women in any way we can.

The $5 initial issuance and renewal fee for the Support Our Troops plates will go towards the Veterans Employment Program Fund.  Senator Carol Blood of Bellevue introduced both LB 6 and LB 138.