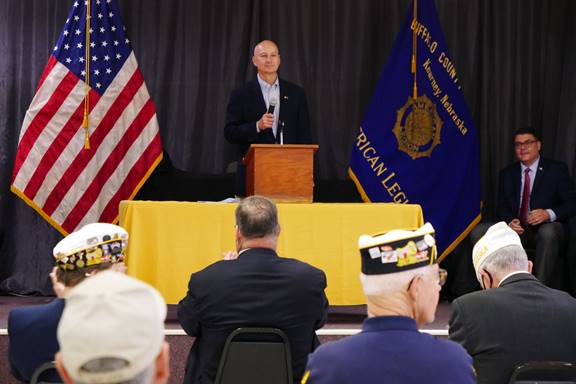 “Nebraska has been at a major competitive disadvantage compared to our neighboring states, all of which offer tax relief on military retirement pay,” said Gov. Ricketts.  “We want to keep Nebraska’s veterans here and welcome veterans from across the country to the Good Life.  LB 153 moves us closer to our goal of becoming the most veteran-friendly state in the nation.”

“I’m very happy we were able to get LB 153 to the Governor’s desk,” said Senator Brewer.  “Countless people and veteran groups in Nebraska have worked on this for over thirty years.  I want to thank Sen. John Lowe in particular because he used his senator priority for this bill.  I also want to thank my fellow senators who didn’t cast a single ‘no’ vote against this bill throughout all three rounds of debate.  I am thrilled to see this kind of support for the military in the legislature.  I also want to thank the Nebraska Department of Veterans’ Affairs for all of their help and coaching.  Exempting 50% of military retired pay from Nebraska income taxes makes us more competitive with our neighboring states, and helps us attract retiring veterans to come to or stay in Nebraska.  This is a great day for Nebraska veterans!”

The Commission on Military and Veteran Affairs recommended the State of Nebraska “provide tax relief to retired military personnel to encourage military retirees to live and work in Nebraska” in its past three reports.

“A tax break for our state’s military retirees has been talked about in one form or another for years,” said Nebraska Department of Veterans’ Affairs Director John Hilgert, who currently serves as the chair of the Commission on Military and Veteran Affairs.  “Today is an exciting step forward for our state, our military retirees, and their families.  As of today Nebraska is more appealing, more competitive, and more veteran-friendly.