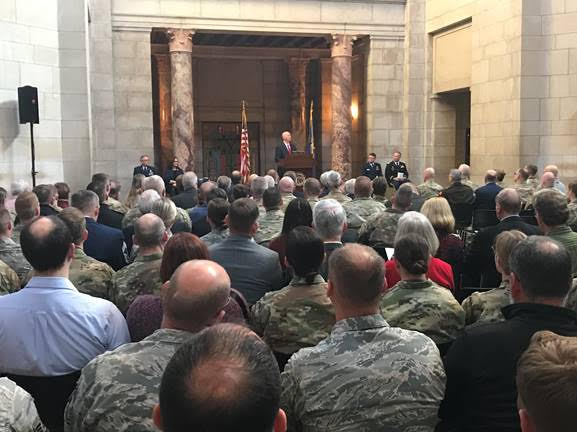 “Happy birthday to the men and women of the National Guard,” said Governor Ricketts.  “The Nebraska National Guard has a long tradition of protecting our state and our country at home and abroad.  This past year, Guard members stepped up to aid our communities during record flooding, heroically saving numerous lives along the way.  Nebraskans support our National Guard, and they stand behind our servicemen and women who sacrifice so much.  Thank you to all our troops for their selfless service to our country and for protecting the freedoms we hold dear.”

“Since before Nebraska gained statehood, the men and women of the Nebraska National Guard have protected our homeland, fought our nation’s wars, and built partnerships that have kept us safe and allowed freedom to flourish,” said Nebraska’s Adjutant General, Maj. Gen. Daryl Bohac.  “In 2019, we responded quickly to one of the largest natural disasters our state has ever experienced.  We also deployed nearly 400 Soldiers and Airmen overseas, and we brought them all home safely.  I am proud of them and forever grateful for the support from our families, communities, and employers here in Nebraska.”

The National Guard, which was founded on December 13, 1636, draws its heritage back to the Massachusetts Bay Colony when the Massachusetts General Court, for the first time in America, established that all able-bodied men between the ages of 16 and 60 were required to join the militia.  Since that day, members of the National Guard have fought in each of America’s wars and continue to serve overseas and participate in combat operations in support of the United States’ continuing international efforts.

Closer to home, the National Guard continues to provide support for such emergencies as floods, hurricanes, tornadoes, earthquakes, and wildfires, while also building partnerships both at home and internationally.

In 2019, Nebraska experienced the most widespread natural disaster in the state’s history.  Guard members helped keep people safe during flooding, and delivered critical relief to communities around the state.  The severe weather made for poor flying conditions, and put air crews at risk.  But that didn’t stop them from completing their missions.  In the month after the flood, 461 soldiers with the Guard:

December has been a busy month for the Guard.  At the beginning of the month, the newly created 179th Cyber Protection Team mobilized for its first deployment.  The unit will spend the next year at Fort Meade, Maryland, working for U.S. Cyber Command to identify and prevent cybersecurity threats.  Earlier this week, Nebraska National Guard air crewmen and coordinators were honored at the Capitol for heroism shown during the 2019 flooding in Nebraska.  In addition, Maj. Gen. Bohac recently returned to Nebraska from Rwanda where he officially formalized a partnership between the Nebraska National Guard and the Rwandan Defense Force on December 12th.

Although not quite as old as the larger National Guard, Nebraska National Guardsmen will mark their 165th birthday this month.  The Nebraska National Guard was founded when Nebraska’s acting Territorial Governor Thomas B. Cuming issued a proclamation on December 23, 1854, recommending that the citizens of the territory organize, in their respective neighborhoods, into volunteer companies.  The territory’s first legally authorized militia consisted of two regiments, one north and one south of the Platte River.