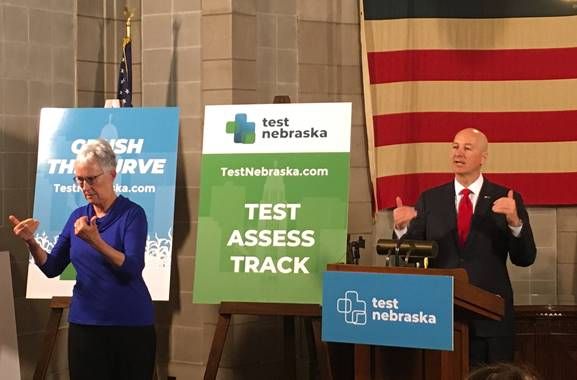 LINCOLN – This afternoon, Governor Pete Ricketts announced a new plan to scale up Nebraska’s capability to test for COVID-19.  The State is launching a public-private partnership to significantly expand testing in Nebraska over the next several weeks.  The program will enlist Nebraskans to take an assessment, get tested, and track their health.

Gov. Ricketts introduced four members of the team partnering with the State to expand testing:

o      First, Nebraskans can go to TestNebraska.com to take an initial assessment.  This helps our team and State epidemiologists to gauge the general health of various communities and to decide where to set up testing sites.

o      Second, we’ll set up testing in different locations across the state in the next 2-5 weeks.  Our testing sites will have multiple kits and multiple test options.

o      Third, we’ll check in with everyone who has been assessed, asking 2-3 follow up questions to track their well-being.

Nebraskans can go online to TestNebraska.com to take the initial assessment.