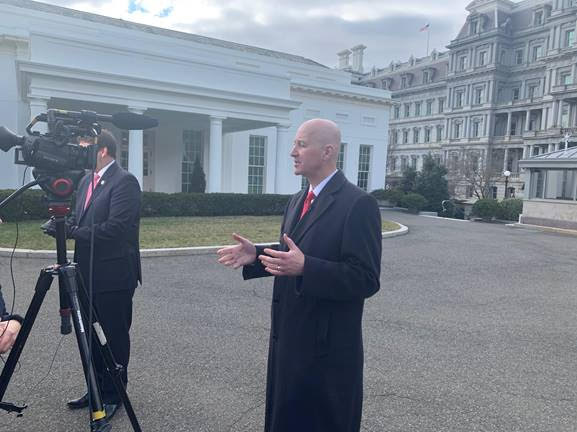 WASHINGTON, D.C. – ,Wednesday, Governor Pete Ricketts attended President Donald J. Trump’s signing ceremony for the U.S.-Mexico-Canada Agreement (USMCA).  Gov. Ricketts has been a vocal proponent of USMCA as President Trump has worked to hammer out the agreement with Canada and Mexico.

“This is a historic moment in our country’s relationship with our two closest neighbors,” said Gov. Ricketts.  “President Trump’s new trade deal ensures Nebraska will have the opportunity to grow our relationship with Canada and Mexico.  I appreciate the hard work of Nebraska’s federal delegation, ag groups, chambers, and so many others who successfully fought to seal the deal on USMCA.”

Debbie Borg of Allen also represented Nebraska at the USMCA signing.  Borg serves on the Nebraska Corn Board and raises row crops and livestock on their family farm with her husband Terry and kids Hannah, Heidi, and Hunter.