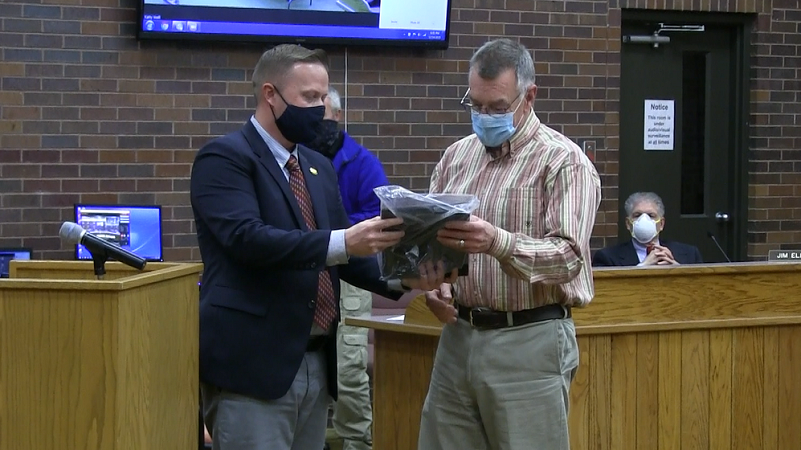 With a little bit of well-timed and well-intentioned subterfuge by Mayor Tony Kaufman, the Gering City Council honored retiring City Administrator Lane Danielzuk during their final meeting of the year.

Following the regular meeting, swearing-in of re-elected council members and approval of board and committee assignments, Kaufman left the dias and took to the podium during public comments to spring the surprise he admitted was sneaky.

Kaufman said with the City Administrator able to cancel agenda items, the council and city staff needed to make sure they had the opportunity to properly thank Danielzuk for his 13 years of service, albeit with mixed emotions. “He’s had a very distinguished career, and we were blessed to have him sunset that career here in Gering. There’s been a lot of challenges over the years, but he held them in stride and met everything head-on.”

Before Danielzuk was presented with a plaque honoring his years overseeing administration of city services, Kaufman said everyone would miss his leadership and dedication, and he brought a skill set that takes years and a career to achieve. “And I think you can tell from the attendance here in the crowd, you’ve made an impact on this staff and this community,” Kaufman concluded.

In a news release last week detailing Danielzuk’s accomplishments over the years, the city said under normal circumstances, the Mayor, Council and City personnel would host a reception, however, due to concerns surrounding COVID-19, the City sadly made the decision to not hold a reception prior to Mr. Danielzuk’s departure.

City Officials invite and encourage the public, community groups and other entities with whom Mr. Danielzuk has been involved, to send him a card or email prior to December 31st.

Cards can also be placed in one of the City’s two utility drop boxes to Mr. Danielzuk’s attention at 1025 P Street, Gering, NE.

For anyone wishing to send an email, please send it to: gpdrecords@gering.org.

Danielzuk’s final day will be Dec. 31, and the appointment of Pat Heath as the new City Administrator effective Jan. 1, 2021 was officially approved Monday night.