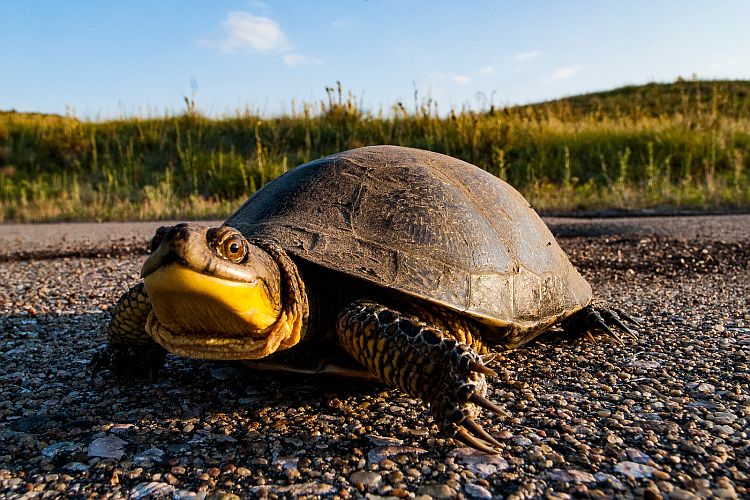 Among Nebraska’s eight species of native turtles, one that is especially happy-looking gets special attention.

The Blanding’s turtle (Emydoidea blandingii) is listed as a “tier 1” species in the Natural Legacy Project, Nebraska’s wildlife action plan. That makes it the only turtle species among the state’s animals and plants determined to have the greatest need for conservation efforts.

Amanda Filipi, an outdoor education specialist at the Nebraska Game and Parks Commission’s Wildcat Hills Nature Center near Gering, said the turtle’s dark shell with yellow dots, which she likens to a starry night, makes this semi-aquatic species attractive. Perhaps most distinctive, though, is its head that is dark above its mouth and yellow below.

Maybe this cheerful-looking turtle has reasons to smile. Even when compared to other turtle species, researchers note that it shows few signs of aging throughout its long life span of more than 70 years.

The species’ range is the upper Midwest and parts of Canada, dipping into the Nebraska’s Sandhills marshes and distinct locales of the northeastern part of the state. Another reason to smile: While the Blanding’s turtle population is considered imperiled or vulnerable throughout almost all of its range, Filipi said research shows that the species may be expanding its range in the Nebraska.

One specific female Blanding’s turtle with which Filipi has become especially familiarized made headlines in June 2017 when it was found east of Mitchell in Scotts Bluff County – about three counties west of where the species had been previously documented.

“It was found alongside a highway 100 miles from its normal range,” she said. “Some research was done on it, and it was found that someone was keeping it as a pet, which is not something you are supposed to do with a Blanding’s turtle.”

Yes, take note that Blanding’s turtles cannot be possessed, transported or sold in Nebraska because of their conservation status. Filipi said researchers studied the turtle’s toenails to help determine where it had, or actually had not, been living.

One of the state’s leading specialists in amphibians and reptiles, Dennis Ferraro, a professor with the University of Nebraska-Lincoln, studied the toenail clippings for stable hydrogen and oxygen isotopes, which can connect the turtle to the chemistry of water at specific Sandhills lakes. However, those tests came back inconclusive. The results, and the fact the turtle readily ate from the hand and was so far from its previously documented range, led specialists to determine it had been a pet and either escaped or was released.

Filipi received special permission to add the turtle to the center’s collection of education animals, and it now serves as a “poster turtle” for the species and its conservation needs.

Conversion of wetlands and uplands for agriculture and other uses has been hard on the species. Fragmentation of land not only causes loss of habitat, but also makes it easier for predators to locate nests. Studies have shown that Blanding’s and other turtles in their range face more than 80 percent nest mortality because of predation from mammals such as raccoons and foxes.

Similar to other hard-shelled herptiles, Blanding’s turtles move between habitats depending on the season. That makes them especially vulnerable to vehicles. Thankfully, Sandhills roads are some of the least traveled in America.

Regardless, drivers should keep an eye out for the Blanding’s and all other turtles while traveling this spring and summer. Those who decide to stop and help a turtle cross the road should turn on hazard lights, watch for traffic and usher the animal toward its destination with as little handling as possible. Those who handle a turtle should grasp it by the middle of its shell and move it to the side of the road it’s facing.

If it’s a Blanding’s turtle, it will surely give a smile in return.