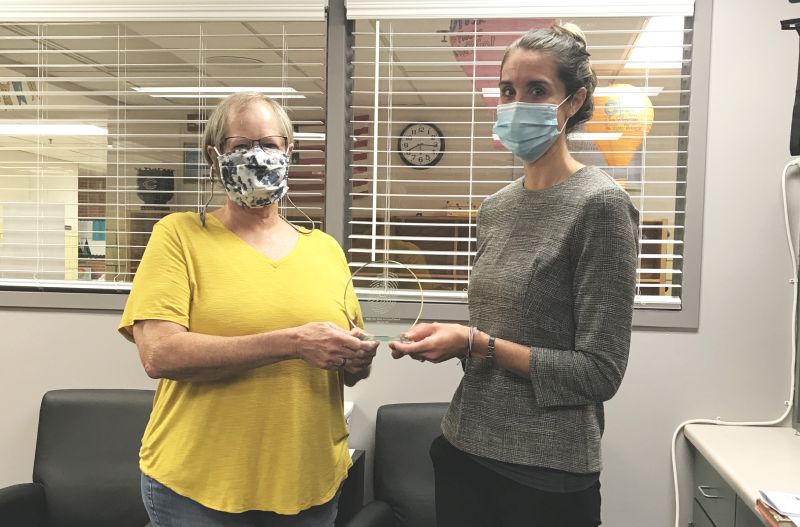 On Tuesday, September 15, Marcia Fritz was named recipient of the eighth annual Make Your Mark on Cozad Award. Due to COVID-19, the award was announced by Cozad Elementary Principal Dale Henderson to the students. Foundation President Claire Bazata and Library Director Laurie Yocom were able to present a plaque to Fritz after the announcement at the school.

The Make Your Mark on Cozad Award is presented in conjunction with the Wilson Public Library’s celebration of International Dot Day. Themes of Peter H. Reynolds’ book The Dot: creativity, courage, and collaboration, inspired the observance of September 15 th by teachers, libraries, and artists around the world. Given as a way to spotlight community members who are enthusiastic supporters of the library, Cozad as a whole, and the arts specifically, the inaugural award was bestowed upon Mrs. Katherine Wilson in September 2013.

Fritz was unanimously selected for the prestigious award at the Cozad Library Foundation’s last regular meeting in early April. Marcia Fritz embodies the themes in The Dot of courage, collaboration, and creativity. She has touched countless children’s lives as a Cozad educator. Marcia is a long-term promoter of the library and was instrumental in building a partnership between Cozad Community School’s AfterZone program and the library. In her role at AfterZone, Marcia has promoted the arts in general to the Cozad children and their families by working with summer theater groups, the Cozad Area Arts Council summer art lessons, and bringing Afterzone students to the library for summer reading, to name but a few. As well, Marcia has served Cozad in many civic and philanthropic capacities such as United Way (now the Charitable Fund of Cozad) and Christ the King Catholic Church, and has been instrumental in the success of Cozad Child Care.