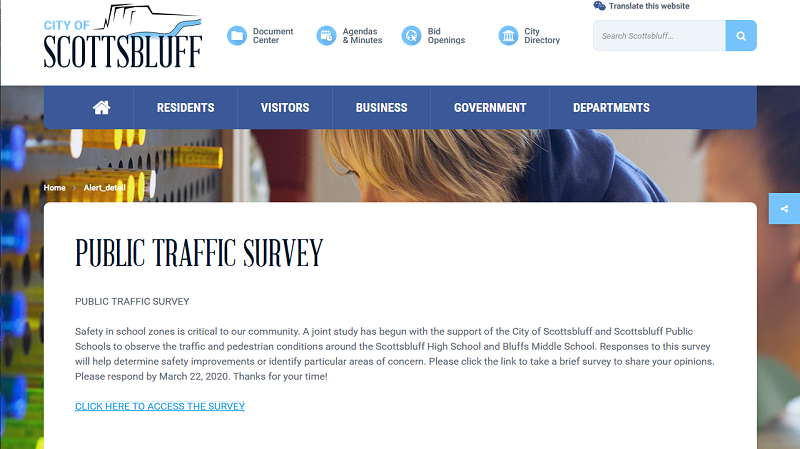 The City of Scottsbluff and the Scottsbluff School District are asking for input on traffic conditions around the High School and Bluffs Middle School.

Links to an online survey are available now on the websites for both entities, asking the motoring public about pros and cons of the traffic around both schools as part of a jointly-supported engineering study by Lamp Rynearson.

Police Chief Kevin Spencer says staff from the engineering firm have already performed several days-worth of traffic pattern observations. “Right now we’re relying on the engineers to suggest some interim safety measures we can take, something that maybe they’ve seen,” says Spencer, “they’ve offered some suggestions, so that’s being talked about, and it has been since the most recent accident. So, I think everybody’s doing all they can to make that safe.”

District Superintendent Rick Myles says there are different ways to look at the issue from both the city and school perspectives, but for the school district, they need to try to adjust student habits wherever they can. “we need students to go to the intersections with traffic lights, we them to park, if they do drive,  in the parking lot or preferably south of 27th Street,” says Myles. “We need to talk with parents about how they pick up their students (at the high school), a lot of times we have traffic congestion at the start of the day and the end of the day.”

Public comments will be taken through the online survey portal through March 22nd.