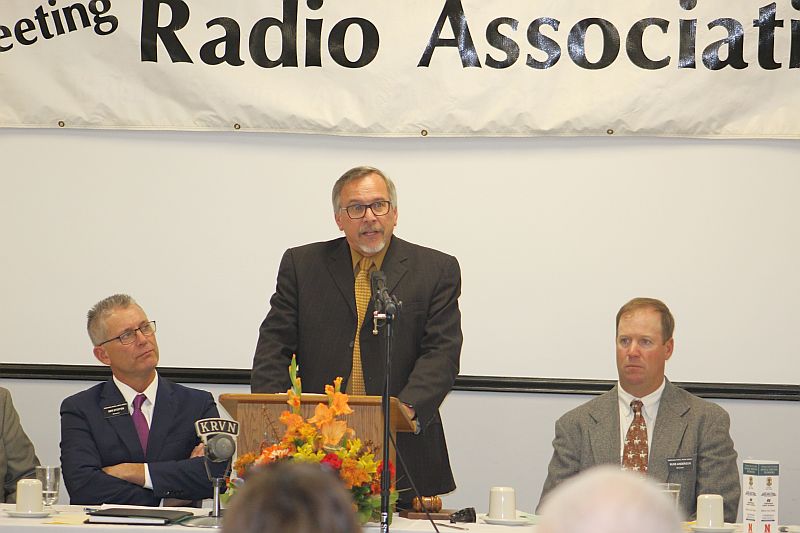 The Nebraska Rural Radio Association bestowed it’s prestigious “Service to Agriculture Award” Monday to Rising City farmer and leader Bart Ruth. NRRA President Ben Steffen of Humboldt presented the award during the NRRA’s 69th annual meeting in Lexington. Ruth is past President of the American Soybean Association and also several roles with the Nebraska Soybean Association. He currently co-chairs the 25×25 National Renewable Energy Steering Committee and is President of Ag Builders of Nebraska.

During his remarks, Ruth said as he looked around the room he say the faces of many men and women with whom he has had the privilege of working alongside. He noted that he “watched as they impacted Agriculture and served as mentors to me.” Ruth is a 6th generation farm operator and noted that “several traits that were instilled in me early in life were dedication to family, active attendance and leadership in our small, rural church and service to the community.” Ruth is the 33rd recipient of the “Service to Agriculture Award”.

Elections were conducted for the Board of Directors positions. There were three open positions and current Directors Steffen, Dennis Fujan and Doug Saathoff were re-elected. Other NRRA Board Members include Russ Anderson of Hyannis, Bart Beattie of Sumner, Debbie Borg of Allen, Rich Lackaff of Bassett, Jim Ramm of Atkinson and Elaine Redfern of Holdrege.