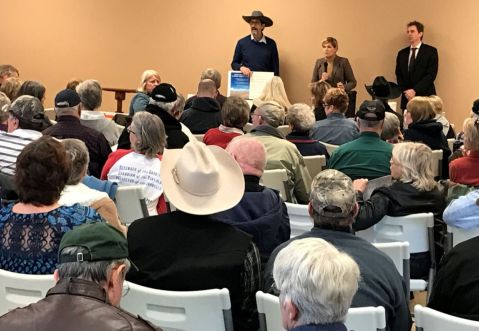 President Trump signed an executive order last week to expedite the building of the Keystone XL Pipeline and the Dakota Access Pipeline.

This action reopened a long debate about the economic and environmental impacts of the pipelines. Trump has said that the pipelines will bring in over 20,000 jobs. Detractors say that transporting Canadian oil across the middle of the U.S. isn’t worth the risks.

The pipelines would transport Canadian tar sands oil to refineries in the Gulf of Mexico.

On Jan. 26 TransCanada, the would-be owners of the pipeline, submitted an application to the U.S. state department for approval of the pipeline.  TransCanada’s President Russ Girling said the project is important for the U.S.

Bold Nebraska was the group that was chiefly responsible for stopping the construction of the pipeline during the Obama Administration. They sighted concerns about leaks in the pipeline combined with the route along the fragile ecosystem of the Nebraska Sandhills. “Bold” fonder Jane Kleeb, was not surprised about the Trump’s order.

“It was no surprise that he did this, he had said during the campaign that he  would approve the Keystone XL. I am just surprised that he is doing it under the banner of ‘America First,’ when this is a foreign pipeline, transporting foreign oil, built by foreign steel,” Kleeb said.

After the ruling by the President,  Nebraska’s Third District Congressional Representative Adrian Smith released a  statement in support of Trumps executive order.

“A large majority of Nebraskans want to see Keystone XL      completed, knowing we need long-term solutions for affordable energy.  I am pleased President Trump is acting right away to encourage private investment in our infrastructure and move this project forward,” Smith said.

Part of the executive order was a memorandum in which Trump said that the materials for the pipeline should be made by “American Steel.” TransCanada has not guaranteed that it will happen.

The President’s actions don’t mean that pipeline construction will begin right away. Kleeb said that there is still more to come.

“We still have very strong state-rights in our country,” she said. “there is still a long eminent domain hearing process as well as a pipeline routing process. So you are looking at at least two years before they even get a permit in Nebraska.”