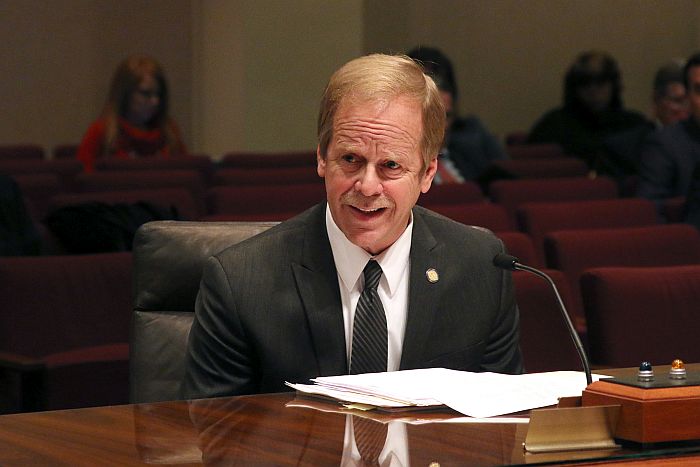 LINCOLN–For decades, tax policy has been a controversial topic in the Nebraska Legislature. This year, two bills propose solutions to bring tax relief to the state.

On Feb. 3, Sen. Tom Briese of Albion and Sen. Steve Erdman of Bayard presented new tax policy bills to the Revenue Committee. While both bills aim to modernize Nebraska’s tax system, they each take different approaches.

Briese introduced LB422 to lower Nebraska’s sales tax rate from 5.5% to 5%. The bill would also add sales tax to services, which would include things like haircuts or tattoos. Currently, sales tax is added to many goods, whereas services in Nebraska are generally not taxable.

Briese said the bill adapts to the increase in services Nebraska’s economy has seen over time, and also leaves room for some services to be exempt from sales tax.

If passed, the law would take effect in October 2022. Briese said he intends the state’s tax revenue will stay the same with it. This means decreasing sales tax to 5% should not decrease Nebraska’s tax revenue because this bill would also include services in sales tax.

During testimony at the Legislature, Briese heard support for and opposition to the bill.

Tiffany Friesen, the editorial director at the Open Sky Policy Institute, testified in support and cited the successes of neighboring states such as South Dakota where many services are taxed. Platte Institute Policy Director Sarah Curry also supported the tax policy in the bill.

“The expansion of the sales tax base has a better chance of raising (tax) revenue without having to raise taxes,” Curry said.

John Hansen, president of the Nebraska Farmers Union, agreed the proposal is a good solution for Nebraska taxpayers.

Opponents to the bill were concerned that including services in sales tax would disproportionately affect low-income individuals and suggested more services should be exempt in areas relating to education, healthcare or medical.

Korby Gilbertson, who is a registered lobbyist with Radcliffe & Associates in Lincoln, opposed the bill on behalf of 41 organizations. She testified that there is currently not enough information to pass the bill out of the Revenue Committee.

“We need to have a comprehensive study first because we don’t know the real numbers and how it would impact the state,” Gilbertson said.

The Legislature also heard concerns from cosmetologists, a licensed nail technician, a tattoo artist and esthetician who said the bill would negatively affect their business at a critical recovery period during the pandemic.

“The taxing of personal services will place extreme burden to individuals and businesses, especially with an uncertain future,” said Tyson Schaffert of Lincoln, a licensed tattoo artist.

The Revenue Committee took no action on the bill on Feb. 3.

LR11CA and LB133: Adopt the EPIC Consumption Tax Act and eliminate other taxes

Erdman introduced LR11CA as a constitutional amendment to change Nebraska’s tax system. The amendment would adopt the Elimination of Property, Income and Corporate tax (EPIC) Consumption Tax Act, which if passed would go on the ballot for a vote in 2022.

He also proposed LB133 to give the Legislature guidance on the implementation of the consumption tax. This bill creates the EPIC Consumption Tax Act, which would eliminate income tax, sales tax, inheritance tax, property tax and other taxes. This bill would replace tax revenue with a one-time, 10.64% consumption tax of services and new goods.

In a column published on the Nebraska Legislature’s website on Jan. 29, Erdman discussed the freedom he believes the consumption tax brings to taxpayers.

“It is the one tax that the taxpayer can control,” Erdman said. “If you don’t want to pay the tax, don’t go shopping.”

There were 18 people who testified in support of the bill ranging from rural and urban Nebraskans, to farmers, business owners and more. Several of these proponents discussed their frustrations with current tax policy, including the burden of property tax.

Lee Todd of Lincoln testified in support of the bill. He grew up on a farm in northern Nebraska and works in real estate.

“We have no control over our property taxes, but I can control what I buy and that is empowering,” Todd said. “This is what the consumption tax does.”

During the Revenue Committee hearing, Erdman said the consumption tax prevents double taxation because it only taxes new goods instead of used goods.

The bill would also exempt certain items from the consumption tax including the sale of land, fuel, property or services for business, investments, educational purposes and used property.

“This is the taxpayers’ bill of rights,” he said. “It neither favors the poor or the rich.”

Senators also heard opposition from four testifiers. President of the Nebraska Farmers Union John Hansen, who testified earlier on LB422, opposed the bill. Hansen was concerned whether funds would be distributed fairly to cities and school districts and questioned the plausibility of a consumption tax.

“I understand good intentions, but I understand the real-world gap between theory and (what’s) practical,” Hansen said. “We need to reduce property taxes, but I do not think this would work.”

Erdman closed the hearing by urging fellow senators to support the bill.

“This is a policy and proposal you have a chance to vote on,” Erdman said. “I made a promise to hundreds of people to help them. I’m asking you to help me help them.”

Celena is a senior at the University of Nebraska–Lincoln studying journalism, advertising and public relations. She enjoys traveling, trying new restaurants and spending time with friends and family. She is from Omaha and is exploring different career paths in communications.