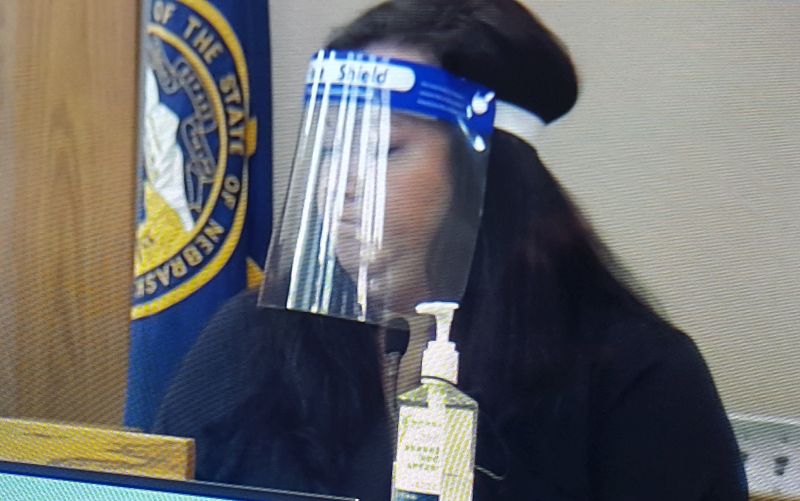 The state called Rebecca Villalobos, Assistant Manager of Home Depot in Lincoln on Tuesday,  October 6 during the Bailey Boswell murder trial. She explained items purchased at the Lincoln store included a combo saw, snips, and a five pack of blades. She testified UPC codes are unique to each product.

The next witness was Lincoln Police Department Investigator Chris Milisits. He testified about obtaining surveillance video from Home Depot and Menards in Lincoln. Milisits also said he obtained video from the Best Western Plus and Lowes in Lincoln related to Bailey Boswell and Aubrey Trail shopping for items on November 15, 2017. Milisits also purchased the same items that the pair bought at Home Depot and those items were shown to jurors during Tuesday’s  proceedings.

Next, Chris Hamblin, the Director of Security for Ameristar Casino in Council Bluffs, Iowa was on the stand. He explained the large number of cameras the casino has and how it took two to three days to obtain video for law enforcement that Boswell and Trail were in when they checked into the hotel on November 17, 2017.

FBI Investigator Mike Maseth was back on the witness stand. He discussed pinger information for one Boswell’s cell phones associated with Verizon. Maseth testified that investigators tried to contact Boswell several times on a pinger number which was energized on November 7, 2017. Meanwhile a great deal of surveillance video was then shown establishing that Trail, Boswell and another women checked into the Ameristar Casino in Council Bluffs, Iowa on November 17. The video showed them in the hotel adjoining the casino and in the casino itself. Also a video was shown of Boswell admitting she had made up names for herself because she is being sought on warrants and that she has talked to Lincoln Police and told them everything.

There was also a selfie of Boswell wearing a pair of pants with stars on them. A similar pair of pants that were brownish-orange was one among items found by investigators on their search of road ditches west of Wilber.

Maseth also identified a broken cell phone found west of Wilber along Hwy 41 as Sydney Loofe’s by the code on the phone which matched the code on an iPhone box in Loofe’s apartment. Maseth also testified a set of keys found in the same general area was a match to Loofe’s vehicle. Maseth was the last of nine witnesses called to the stand on Tuesday.

Ayla Frerichs, the Manager of LaQuinta Inn & Suites in Kearney took the stand and testified Boswell, Trail and another woman stopped at the hotel on Nov. 22, 2017, but only long enough to book a room. The three checked in for a matter of minutes when they decided to take their luggage back to the car they arrived in, a silver Chrysler 300, and left. Frerichs says the three had plans to stay two days, but instead abruptly left. Jurors watched the event on surveillance video and at a later date, the FBI contacted the hotel for the video.

The state also called Borders Inn & Suites Guest Services Manager Pam Wright who produced data for Trail, Boswell and the other woman staying at the Grand Island facility prior to traveling to Kearney.

Menards Investigator David Bolgren was called to testify about video Menards obtained from Nov. 15, 2017 which was assembled at the request of law enforcement. The video shows Loofe leaving the front entrance of Menards to go to the store’s guard shack.  As she is leaving, Aubrey Trail is only a short distance away, but Loofe did not know him at the time.