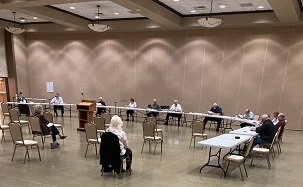 Goulette says results for the two water mains being tested right now should be available within a week or two.

He adds the City is looking at close to this fall or early this winter before everything is complete.

The Council also considered Bids for the Alley Paving and Storm Water Improvement Project at the meeting.

The Council also heard requests for parking stalls on public right aways at the meeting. Goulette says one of those requests came from Franciscan Healthcare.

Goulette says one of the other ones was at 1246 Prinz Street for a resident who wants more off street parking with the 3rd one at 624 W. Sherman St. for a person who wants to pave another strip along the one he currently has for another vehicle.

The Council also approved a request from Road Gems Car Club at Tuesday night’s meeting for use of the Nielsen Center and surrounding streets and parking lots for the Car Show on September 19th.

A public meeting will be held on Thursday, May 27th at 7:00 p.m. at the Nielsen Center regarding a new swimming pool for West Point. Council Member Ryan Penrose has more.

Penrose says diving boards will probably be coming back and there could be new features such as toddler areas and zero entry as well as a water slide or two to replace the existing slides.