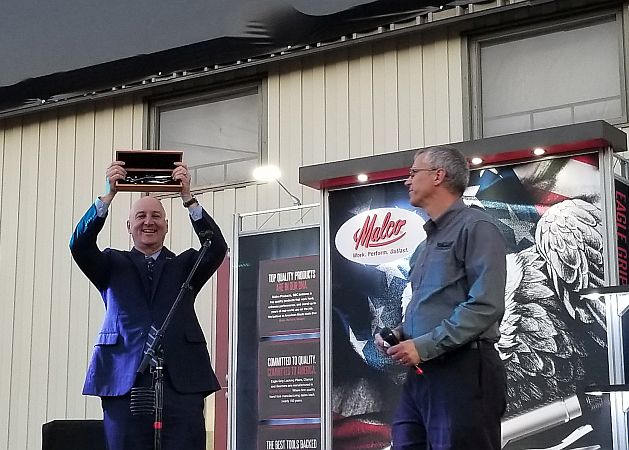 Malco Products hosted a grand opening Friday evening of their manufacturing facility in DeWitt. The Minnesota-based company will be producing locking plier tools in the same building that housed the former Vise-Grip factory that closed 10 years ago. The downtown area was closed off for the event as Malco CEO Mardon Quandt made it official from staging set on a trailer…”Welcome to our grand opening event to celebrate the official opening here of our facility in DeWitt, NE and  also introducing our Eagle Grip product line!” The plant will produce 10 new locking plier tools marketed under the name “Eagle Grip”. Residents will once again take pride in producing quality tools as Quandt added that “we are more expensive than our foreign competitors but, we offer high quality and durability, excellent customer service and customized, unique products that help our professional end users to perform their jobs more effectively.  Our tagline is ‘Work. Perform. Outlast.” and that’s our expectation for the Eagle Grip product line.”

Two bus loads of employees from Malco’s Annandale, MN operation arrived late Friday afternoon and toured the DeWitt plant along with a meal before the ceremony. Many remarked at the size of the 340,000 square foot DeWitt plant building which has largely been vacant over the past decade. The cavernous building is clean but, floors have markings from previous machines and painted pathway guides. One area has a number of former production machines lined up in a row.

Today a modest production area is slowly coming online in one part of the building. The plan is to create prototypes of tools this fall and winter and launch them at a major hardware show in the Spring. Quandt says they will produce 4 different locking pliers, 3 hand seamers(used for bending sheet metal) and a couple of welding  clamps. He says they will hire production workers as the demand approaches but, many of the current employees worked in the former Vise-Grip factory. The Eagle Grip pliers will have a similar look and feel as those familiar with Vise-Grips. They will be produced in 7″ and 10″ sizes and some with wire cutters too.

In an interview before the ceremony, Gov. Rickets described it as a great day for DeWitt and a great day for the State of Nebraska “because we are helping grow our state’s second largest industry(Manufacturing). He said it was also great for America “because it represents that manufacturing jobs are coming back to our country. That people realize ‘Made in America’ means something here and companies like Malco are making that happen.” The State of Nebraska assisted recruitment efforts with a $500,000 grant from it’s ‘Site and Building Development Fund’ to assist with building remodeling. Ricketts says it represents the state’s commitment to helping bring jobs to small towns and rural communities across the State of Nebraska.

Randy Badman was Chairman of the Village of DeWitt’s Board of Trustees when the owners of the former Vise-Grip plant shut down production in October 2018 and moved it’s operations to China. He described the loss as a “big blow to the small community” as the Vise-Grips were produced in DeWitt since 1924. Badman himself had worked at the plant for 36 years and was tooling manager at it’s closing. Since that time he traveled outside of the community for employment. Badman is Village Board Chairman today and he’s since joined the Malco facility in DeWitt in a consulting capacity saying “it’s very exciting to be able to come back into the building and bring it back to life again. Badman described Malco Products as “a very good company” with employee ownership. He adds that “they care about their employees and they care about the town and being here.”

Dave Rentschler had worked for 20 years in the Vise-Grip factory before it closed in 2008. He estimated there were around 650 employees at it’s peak of operations but, down to over 300 when it closed. He said the employees took pride in the tools because it was “made in the U.S.A” and their camaraderie “was like a family.” Rentschler is now back in the building in Malco’s New Products Department as “Process Specialist”. “I want to be part of something special” and he suspects there will be a bigger demand for the new Eagle Grips than is being anticipated as people “want their tools made in the U.S.A.” Rentschler acknowledges it has been a big project getting to this point with bringing in machines and dialing them in as well as using new dyes to stamp out the Eagle Grip components.

Malco Products has been manufacturing tools for the Heating, Ventilation and Air Conditioning trade for 70 years in Minnesota. They began studying the feasibility of expanding their manufacturing to DeWitt about two years ago. Quandt said several factors were attractive about DeWitt including the number of former employees still in the area with the “expertise of making hand tools”, the support of the State of Nebraska to aide in remodeling the building and that “the facility was already set-up for hand tool manufacturing.”

DeWitt residents will remember the familiar distinctive sound of the press machine below.

(VIDEO) Barn Market will open for second weekend near Hastings