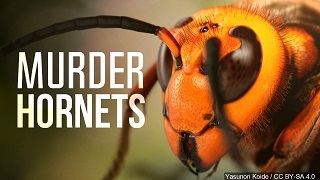 Burk says no new colonies have been found yet, but there is an intense searching going on.

Burk says they can wipe out a whole honeybee hive in one afternoon.

Dozens of people are killed by them every year.

Burk says they’d be more likely to pop up in our listening area as opposed to areas to our West.

Burk says the threat is pretty remote, but there’s no reason to think they couldn’t survive if they came here.