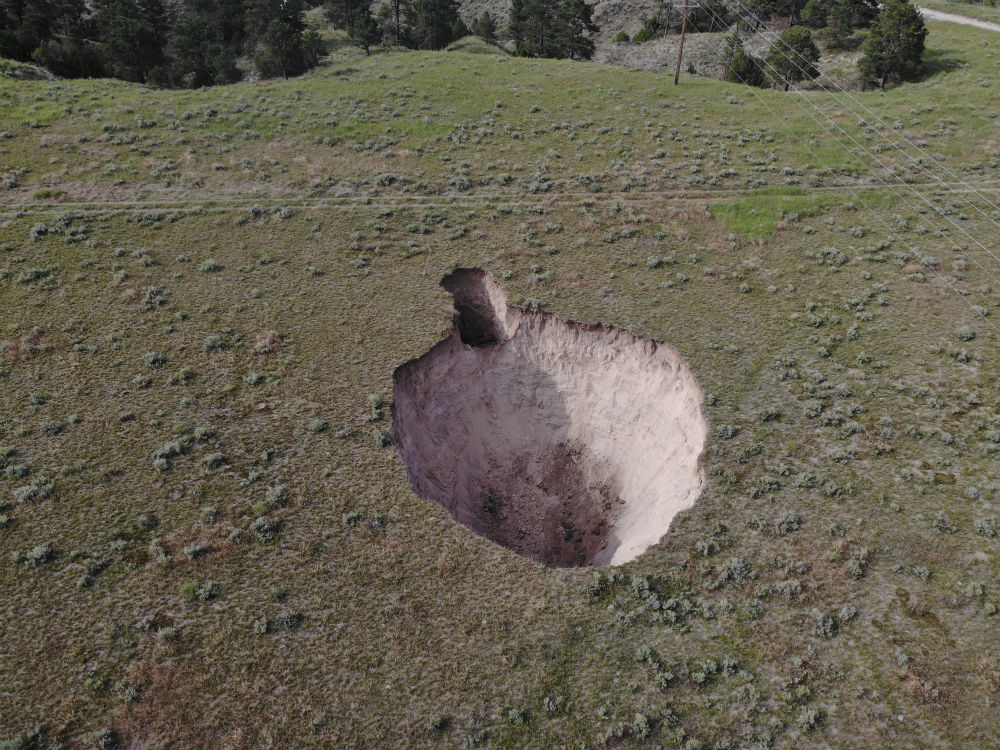 An aerial view of the sink holes created by the July 17 tunnel collapse on the Gering-Fort Laramie/Goshen Irrigation District canal. The larger sink hole is approximately 100 feet across and 50 feet deep. Photo Courtesy of Justin Burkart, Goshen Emergency Management Association.

Communities in eastern Wyoming and western Nebraska are pulling together to assist farmers affected by the Ft. Laramie Canal failure.

Now, Simplot Grower Solutions, B&C Steel Corporation, and Kelley Bean Company have made donations for a new matching challenge of $20,000.

“We decided we needed to figure out how to support the community as well,” said Ray Carpenter, regional manager of Simplot Grower Solutions. “This is important to us as a company and will be offering another $10,000.”

The canal breach and tunnel collapse happened west of Lingle, Wyo. on July 17. Kevin Kelley, president of Kelley Bean, was at a conference in Colorado when the failure occurred and returned immediately.

“We’ve got a lot of growers that raise dry beans and other crops and just wanted to be available if there was anything at all we could do,” he said.

The ag businesses and farmers know how vital irrigation in July and August is to crops.

“It’s very critical it’s (canal) repaired as quickly as possible to help save some of those crops,” said Jim Reinhardt president of B&C Steel.

He had also heard of Hod Kosman’s idea and wanted to help the producers.

“We’ve had above-normal precipitation, so that’s a positive thing and the crops were looking good,” Kelley said. “The beans are the last to be irrigated, and they need a drink right now, there is rain in the forecast, but it’s bleak.”

It’s a big undertaking, and everyone from the irrigation districts to the state is trying to get water to the crops, he added.

Any group or individual can donate at a Nebraska or Wyoming Platte Valley Bank location, online at pvbank.com/give or the OTCF website otcf.org.