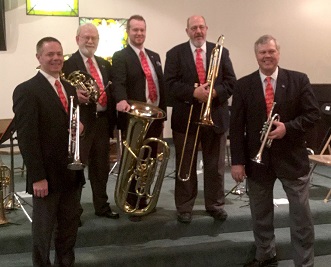 NORFOLK, NE – The five-member ensemble A Touch of Brass (ATOB) will perform in concert on the Norfolk campus of Northeast Community College.

The concert will be held on Sunday, January 26, at 2 p.m., in the Cox Activities Center Theatre.

The theme of the group’s 2020 concert tour is “Travel USA.” Members invite the public to travel with them from Boston to Chattanooga, New Orleans to Saint Louis, and Georgia to San Francisco. A Touch of Brass will stop at many more sights of interest across the USA, including a special tour on Route 66. The views and personal stories of ensemble members will be explored during the program.

Members of A Touch of Brass are Dave Bohnert – Trumpet. He is the band director, trumpet instructor, and department chair of the Wayne State music department. Gary Reeves – French Horn. Reeves has been a music instructor in Iowa, Alabama, Utah, Oregon and recently retired from the University of South Dakota in Vermillion.

Playing trombone is Randy Neuharth, a member of ATOB for over 25-years. He taught public schools in South Dakota and was Bloomfield for 30-years. Neuharth served as director of music at Northeast Community College for ten years before retiring several years ago.

Keith Krueger, founder and director of A Touch of Brass, plays trumpet in the group which was formed in 1984. He has taught music in public schools and performed with the United States Air Force bands for ten years. He is currently farming.

The concert is free and open to the public.