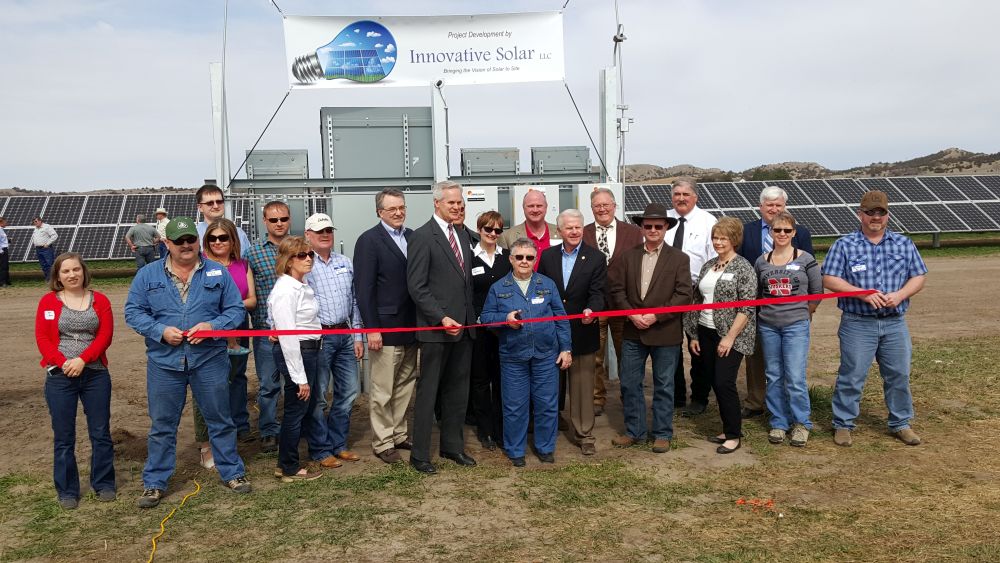 RRN/ Ribbon cutting was held on Monday March 14, 2016 for the installation of the largest solar array in Nebraska on the Pandorf Land & Cattle Co. ranch northwest of Callaway.

A crowd of people gathered in a remote part of southwestern Custer County Monday for the dedication of the state’s largest solar array system capable of producing 600 kilowatts of electricity. Prior to that, Lt. Gov. Mike Foley offered remarks at a program held in the Callway Community Center calling it an innovative and exciting project. The solar panels are located northwest of Callway on the Pandorf Land & Cattle Co. ranch. Innovative Solar, a Holdrege-based company is the developer. The electricity generated at the site will be purchased by Custer Public Power District at comparable rate to which they purchase wholesale power from Nebraska Public Power District.

The idea for a solar installation began a little more than a year ago when the financial manager for Pandorf Land & Cattle approached them with idea as a way to help manage their taxable income. Mike Pandorf said it looked like a good idea and they studied it further. Among the considerations were that the cost of the panels themselves have come down in the past couple of years. Like any other farming or ranching decision, Pandorf said it had to make economic sense and “pay it’s way”.

The solar array will generate enough electricity to power 60 homes or from 10 to 12 center pivots. All of the power will be purchased by Custer Public Power District, according to General Manager Rick Nelson. He notes that Custer Power will be purchasing the solar power at similar rate to what they pay to purchase wholesale power from Nebraska Public Power District. Nelson says there’s been a lot of interest from other landowner groups in solar installations.

Sen. Matt Williams says it was exciting to see such a structure in his legislative district. He added that from a legislative stand-point, senators need to continue to create an environment that’s conducive to that type development.