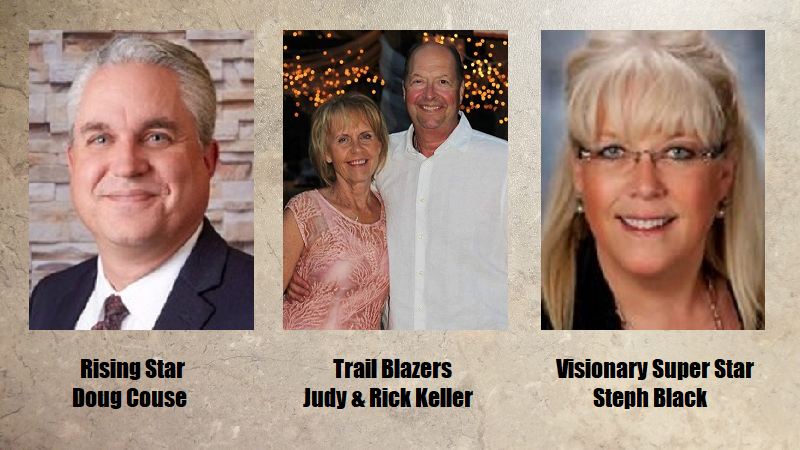 Members of the Scottsbluff-Gering Chamber of Commerce gathered in Gering Tuesday night to honor those named as Chamber Award Winners for 2019, including a new award for outstanding service.

Rick and Judy Keller were honored as the Chamber’s 2019 Trail Blazers, given to an outstanding leader or leaders in the community. The pair were both born in Scottsbluff, and both worked at Jack and Jill grocery store in 1974 before marrying a year later, and opening the Meat Shoppe in 1983. In addition to expanding into catering in 1991, seven years later they took over as private contract managers for the Gering Civic Center, orchestrating hospitality and dining arrangements for more than 60,000 annual Civic Center attendees. Volunteerism also happens in their busy lives with the Gering Convention & Visitors Bureau, Oregon Trail Days, Festival of Hope. Rotary, Calvary Lutheran Church and more. In 2011, they were honored with the 2011 Gering CVB Community Volunteer Buddy Award.

The 2019 Visionary Super Star is Steph Black, Executive Director of the United Way of Western Nebraska. The oldest of four children, she graduated from Gering High School in 1976, and after a stint as a nurse in Arizona, returned to the Valley in the early 1980’s, deciding to manage the Gering Municipal Golf Course for eight years. For the next 13 years, she was employment coordinator/rehab specialist for Cirrus House, followed by 7 years as project coordinator for the Chamber. In 2011, she moved into her current role, engaging volunteers and building strong teams to benefit area non-profits. Black also has a strong presence in volunteerism, working with Keep Scottsbluff/Gering Beautiful, Panhandle Partnerships, Day of Caring, Project Connect and her latest venture, leading the Panhandle Coop Ministry. The award is presented to a community member who has been a part of the local business community for six years or more.

Doug Couse was named the 2019 Rising Star, given to a Chamber member with less than five years in the community. A relative new-comer to the region, Couse was a Colorado native most of his life, meeting his future bride when he was a bank teller and she wanted to open a bank account. Following a rise in his career, he and his family moved to Gering in 2016, becoming an officer for Western States Bank, and making a deep dive into the community. He graduated from Leadership Scotts Bluff in 2018, and is an active member of the Lions Club, serving as a past-president. He currently Co-Chairs the Chamber Ambassador Committee, is President-Elect for United Way and active at Northfield Church. Family is important to him and he loves hanging out with his kids, Spencer and Danielle.

As the event drew to a close, outgoing chair Jeff Wolfe announced a new Outstanding Service Award, the first ever given by the Chamber.  Karen Anderson was honored for her 22 years of service to the organization.

Wolfe told the crowd that over the years, he couldn’t remember an awards banquet in which a gavel was handed over to the incoming Chair of the Chamber Board of Directors, but this year would be different. With that, Wolfe gave new Chair Katie Camacho of the Webb Family of Companies a symbolic, pink plastic, blow-up gavel as she assumed office.

The awards were announced during the banquet held at the Gering Civic Center.