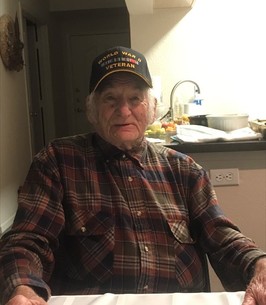 Funeral services will be held on Wednesday, January 22, 2020, at 1 p.m. at St. Peter’s Lutheran Church in Pilger, NE with Deb Hammer, PMA officiating.  Visitation will be one hour prior to the service on Wednesday at the church.  Interment with military honors will be in the Pilger Cemetery.

Minnick Funeral Home in Wisner, NE is assisting with the arrangements.

Einar Johannes Jensen, 95, of Indianola, IA passed away on January 14, 2020 in Scottsdale, AZ. He was born March 28, 1924 on a farm north of Pilger, NE to Danish immigrant parents John Carl Jensen and Karen Louise Pedersen. Einar attended Stanton County Rural School District #43 until 1936, when the family moved into town. He graduated from Pilger High School in 1942. After graduation Einar had plans to work for the railroad, enrolling in state trade school in Milford, NE. In October of 1942, he enlisted in the United States Army Reserves and then was drafted in December. He trained at Ft. Leavenworth, KS and Camp Crowder, MO for radio maintenance. In 1943, his service call sent him to New York for more technical training and in 1944 sent him to New Guinea and then for 18 months in Lingayen Gulf in the Philippines, after which he was stationed at Clark Field in the Philippines. Einar was honorably discharged in January of 1946. Returning to Pilger, he did carpentry work with his dad, offering many volunteer hours building St. Peter’s Lutheran Church and parsonage. He later started Jensen Electric in Pilger, serving the community.

Einar met Betty Swartz at Miller’s Grocery and they were married in 1948. After returning to school, Einar began working for the Federal Aviation Authority, moving the family to Waterloo, IA, then Indianola, IA working for the Des Moines Airport until retiring in 1985. Retirement years brought travel to Florida, Texas and finally being yearly “snow birds” in Arizona.

Einar was preceded in death by his parents, one brother-Elmer, two sister-Verna Haist and Mrytle Konig, his beloved wife of almost 60 years Betty, and a son-in-law-Gary Webrand.