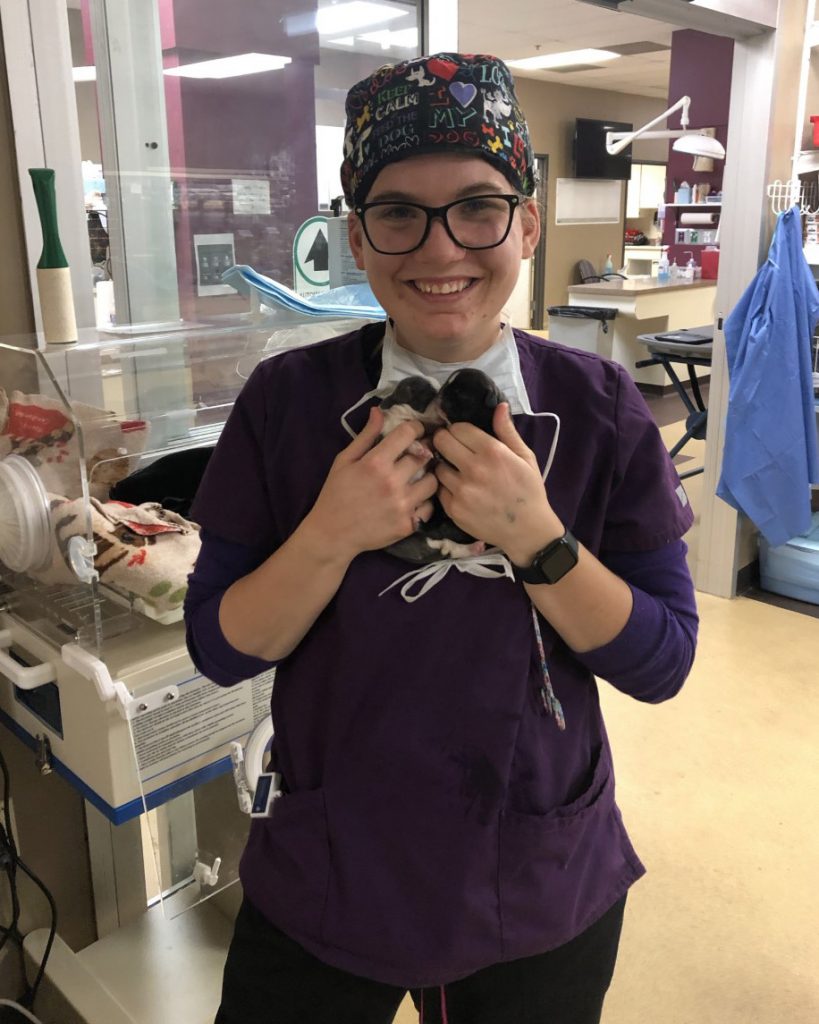 CURTIS, Neb. –  A fast-paced month after her college commencement as a veterinary technician, Nebraska native Chrissy Starkey is settled into a new home and a new job.

The graduate of the Nebraska College of Technical Agriculture at Curtis now resides near Linwood, Kansas, along with her horse, two cats and three dogs.

Starkey is employed at Mission Veterinary Emergency and Specialty Hospital, where in March and April she became the first student intern from NCTA.

The large facility which covers more than a city block and has 75 employees serves an extensive clientele of companion and small animals 24 hours per day, seven days a week.

“I am an overnight ER tech, and by working overnights I do everything from surgeries to simple care of the animals, to help running codes (for resuscitation),” Starkey says. “I love it!”

An associate of applied science degree from the University of Nebraska-NCTA put Starkey on course to sit for a national exam on July 29 and possibly become a credentialed professional in three states.

Goals set as a teenager charted her academic and career choices.

“I had known about NCTA since I was around 13 years old years old,” says Starkey. “It became my dream college and my goal to graduate from there in veterinary technology.”

Starkey grew up with a love for animals and an interest in animal health care.

While being home schooled in her teen years at Genoa, Nebraska, she started working in a general practice veterinary clinic nearby at Columbus and gained five years of experience there.

Assured of her desired goals, Starkey began her dream and enrolled in college at Curtis.

Following two years of intensive hands-on studies at NCTA, including an 8-week internship at the Mission hospital, Starkey graduated May 7 in a virtual commencement.

The animal lover is all smiles in a photo taken three weeks later at MVESH after helping deliver bulldog puppies by C-section.

“That was one of many experiences that I’ve had to use my skills from NCTA, just in the past few weeks,” Starkey says.

Vet tech graduates from NCTA must be proficient in 130-plus essential skills, a requirement of college programs accredited by the American Veterinary Medical Association.

Starkey said she uses many of those skills in emergencies.

“Running a code is like doing CPR and assisting the animal when it comes in and is not breathing or their heart stops,” she explains. “You intubate them, do chest compressions, get them all hooked up to EKG’s and SPO2 monitors, whatever is necessary.”

Laboratory procedures taught at NCTA are vital to becoming a licensed veterinary technician.

An LVT, or in some states known as a certified or registered veterinary technician, is similar to a nurse or technologist role in human medicine.  An LVT works under the direction of a veterinarian.

The NCTA Veterinary Technology Program, launched by the University of Nebraska in 1969, was one of the first two college programs in the United States to be accredited by AVMA during August of 1973.

Like her predecessors, Starkey spent most of her time while at Curtis with classmates and professors at the Vet Tech complex.

Those close relationships were valuable to her college success and are among her best memories.

“Two highlights from my time at NCTA is the opportunity for really getting to know my teachers,” Starkey says, adding, “And, my trip to Costa Rica with Safari Club.”

Each January between semesters, Safari Club students and guests travel internationally or domestically on a study trip. The 10-day program emphasizes exotic animals and their care, in addition to studying cultures and animal conservation.

Starkey documented much her group’s study trip to Costa Rica with photographs. “I will say it was a once-in-a-lifetime trip.” Students gave a public seminar in February.

Four NCTA faculty and a facilities coordinator are a key part of the student experience in the vet tech program.

“They are easily accessible and always ready to help the students,” Starkey says.

In addition to academic programs, Vet Tech sponsors Student Technicians of Veterinary Medicine Association (STVMA), the Safari Club, and a Stock Dog Team, which trains and trials stock dogs such as Border Collies and Australian Shepherds for low-stress livestock handling.

Starkey received a bonus from her NCTA experience. At the end-of-year awards program, Starkey learned she was awarded a $500 scholarship from the Veterinary Technician Continuing Education Association.

First, however, Starkey and other NCTA graduates are studying and taking online practice tests for the Veterinary Technicians National Examination. Starkey’s test is July 29.

The VTNE is offered three times a year by the American Association of Veterinary State Boards, and applicants need a passing score. They then take tests in the state where they seek to be licensed.

Starkey intends to become licensed in Kansas, Missouri and Nebraska.

To youth interested in animal health and agriculture programs in Nebraska, Starkey shares this advice.

“High school students planning to enroll in Curtis, keep your mind open. You get to experience new things every day at NCTA,” she says.

“Join clubs, be involved and talk to your teachers. They truly do care about you.”