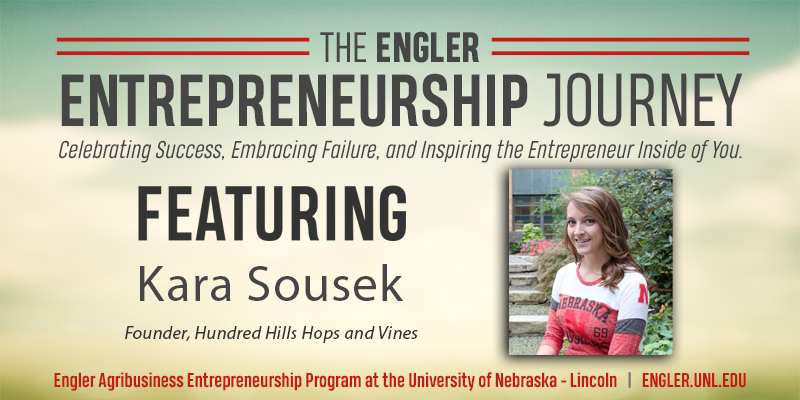 I’ve just always had that mentality that my generation was going to bring something else to the family farm.

Kara Sousek is a hard-working farm girl at heart. She grew up on her family’s diversified operation where they raise row crops and have experience raising hogs and beef cattle.

Contributing to the operation was something Sousek always wanted to do.

“I’ve just always had that mentality that my generation was going to bring something else to the family farm,” Sousek said.

In time, she did bring something else to the farm: hops and grapes.

Sousek studied horticulture at the University of Nebraska- Lincoln, and eventually became president of the UNL Horticulture Club. She also worked at a vineyard near Raymond, Nebraska, which is where she discovered viticulture.

“I just kinda found out that I loved it, and I loved the lifestyle that goes along with running a vineyard,” said Sousek.

But it wasn’t until her junior year of college that Sousek, hesitantly, entered the Engler Agribusiness Entrepreneurship program. She recalled her involvement as a “gradual transition.” Despite her hesitance, she eventually realized she wanted to own her own business.

“It was pretty nerve-wracking. There was a lot of planning involved because even though we planted in May, I had to order the vines back in November. So toward the end of college, I was really thinking about whether I start something right away or not or if I wait. But I just kinda kept thinking ‘If not now, then when?’.

So she decided now. Today, Sousek is the founder and owner of Hundred Hills Hops and Vines based out of Prague, Nebraska. She grows one acre of vines and one-quarter acre of hops.

Grape vines usually take three years before they produce a crop. So even though Sousek has been in business since November 2016, this is the first year she will be able to harvest a grape crop, a milestone she’s been eager to hit since the beginning.

Sousek, alongside her business partner and brother-in-law, is expanding her operation this year by renting 10 additional acres of land from the Raymond vineyard – the vineyard that kindled her passion for viticulture. Her grapes will be distributed to wineries across the state, and her hops go to various homebrewers.

Learn more about the Engler Agribusiness Entrepreneurship program at the University of Nebraska – Lincoln at engler.unl.edu.