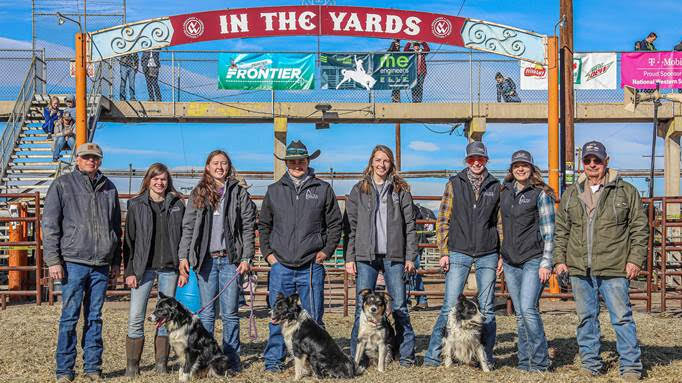 The Nebraska College of Technical Agriculture Stock Dog Team again joins the Outback Stock Dog Association in hosting a two-day trial at the NCTA campus in Curtis on February 22-23.

“This will be the first trial for one of the dogs I’ve been training,” said Breauna Derr, whose 2-year-old Border Collie Sparky placed eighth in the intermediate contest at the National Western Stock Show cattle dog contest.

“We are working on how to build her confidence in working with cattle,” said Derr, of Friend, Nebraska. Derr was joined in the stock show “yards” by five teammates and mentors of the Outback group.

CJ Monheiser of Hershey, Nebraska, and his dog, Jennie, led the NCTA team by placing sixth in the Intermediate division. Each handler and dog competed amid a field of 14 on a sunny Sunday afternoon at the end of January in the outdoor arena of the stock show.

Contestants are judged by a score for the dog’s ability to herd cattle around the arena and into a holding pen, while being timed for the faster trials.

Rounding out the NCTA contingent at the trials were Alexandra Hazuka and Dave of McDonald, Kansas; Joli Brown and Lou, of Waverly, Nebraska, and Kaytie Henrickson and Kip of Norton, Kansas. Emily Hubbell of Lexington, Nebraska supported her teammates but was unable to compete due to an injury to her dog.

Students are studying veterinary technology, animal science or livestock management at NCTA, a two-year campus which is part of the University of Nebraska system.

NCTA Aggie students train their stock dogs, either raising their own or purchasing the dogs as pups. Students and dogs often practice their skills at the rural Curtis farm of Kelly Popp, where they can work on herding sheep and cattle.

Anyone interested in viewing the stock dogs in action, or competing as handlers at the campus trials, are invited to the indoor arena of the Livestock Teaching Center at the NCTA Campus in Curtis.

Competition begins at 9 a.m. daily, and will conclude mid-afternoon on Sunday. Admission is free for spectators. Registrants can gain information from Judy Bowmaster Cole, NCTA professor and club sponsor, or from Kelly Popp of Curtis.

Find more photos and information at Facebook for the NCTA Stock Dog Team or The Outback Stock Dog Association.