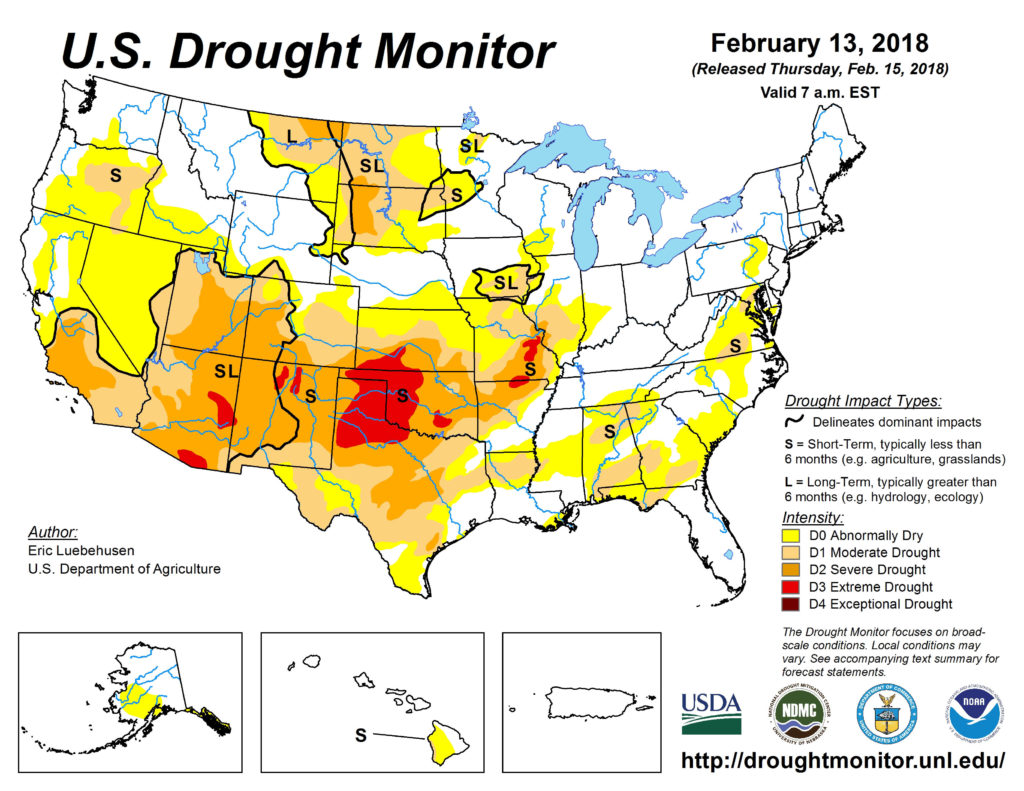 During the 7-day period (ending Tuesday morning), heavy to excessive rainfall eased or eliminated dryness and drought across much of the eastern, southeastern, and southcentral U.S. Conversely, drought intensified and expanded from the central Corn Belt southwestward across the southern Plains into the Southwest, including much of southern California. Other modest changes to the nation’s drought depiction over the past 7 days included reductions to drought intensity in Montana as a result of recent snowy, cold weather, while dryness and drought expanded in Oregon due in large part to subpar snowpacks.

Cold weather prevailed, with a swath of welcomed snowfall in central portions of the region contrasting with intensifying drought to the south. From Iowa into southern Michigan, widespread snow (4-12 inches, locally more) boosted moisture prospects, with a liquid equivalent 0.5 inch to locally more than an inch. As a result, there were modest reductions to Abnormal Dryness (D0) in parts of Iowa, southwestern Minnesota, and east-central Wisconsin. Meanwhile, drought continued to intensify from southeastern Missouri into southern Illinois and west-central Indiana. Dryness was most pronounced across eastern Missouri and neighboring portions of Illinois, where 6-month precipitation has averaged a meager 25 to 50 percent of normal (deficits of 8 to 12 inches). In these locales, Severe and Extreme Drought (D2 and D3) were 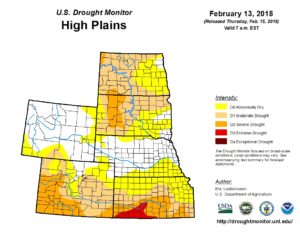 Additional snow in central portions of the region contrasted with dry conditions elsewhere. There were no changes made to the drought depiction in the Dakotas, where a lack of snowfall to date has led to declining prospects for spring meltoff; resultant detrimental impacts on topsoil moisture and stock pond levels remained a primary concern. Meanwhile, a continuation of the recent snowy weather pattern in northeastern Colorado, southeastern Wyoming, northwestern Kansas, and much of Nebraska (30-day surplus of 1-2 inches, liquid equivalent) supported the reduction of Moderate Drought (D1) and Abnormal Dryness (D0). Likewise, moderate to heavy snow (depths averaging 12 to 24 inches, liquid equivalent 1 to 2 inches) in northeastern Montana supported some reduction of the state’s persistent long-term drought. Conversely, southern Kansas remained locked in the same drought which has held a firm, intensifying grip on the southern Plains. However, additional detailed assessment of data coupled with information from the field led to a minor adjustment of the Extreme Drought (D3) which slices over the south-central U.S., with the depiction shifted slightly east from southeastern Colorado into western Oklahoma to reflect the updated information. 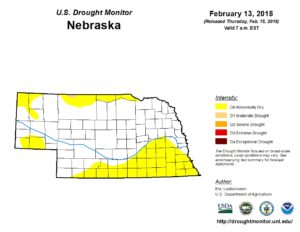 An unsettled weather pattern will maintain periods of rain and snow over much of the nation, although pockets of dryness will persist. A series of storms will bring moderate to heavy rain and mountain snow to much of the west, although unfavorably dry conditions will persist from California into western Nevada. East of the Rockies, an active southern storm track will bring much-needed precipitation to locales from southeastern New Mexico across the southern two thirds of Texas into southern Oklahoma and the northern Delta. Despite the welcomed storminess, dry weather will linger from the south-central Plains into western Missouri as well as over the lower Southeast. Farther north, another round of moderate to heavy snow is expected from Montana into the Great Lakes and eastern Corn Belt, and may include the Mid-Atlantic as well as Northeastern States. The NWS 6- to 10-day outlook for February 20 – 24 calls for near- to above-normal precipitation over much of the nation, in particular areas east of the Mississippi save for Florida and the lower Southeast, where drier-than-normal conditions are expected. Below-normal precipitation is also anticipated in the Southwest and on the southern High Plains. Above-normal temperatures over the southern and eastern U.S. will contrast with colder-than-normal weather from the Pacific Coast States into the upper Midwest.

Bill Even: U.S. pork industry learns from adversity and looks to the future