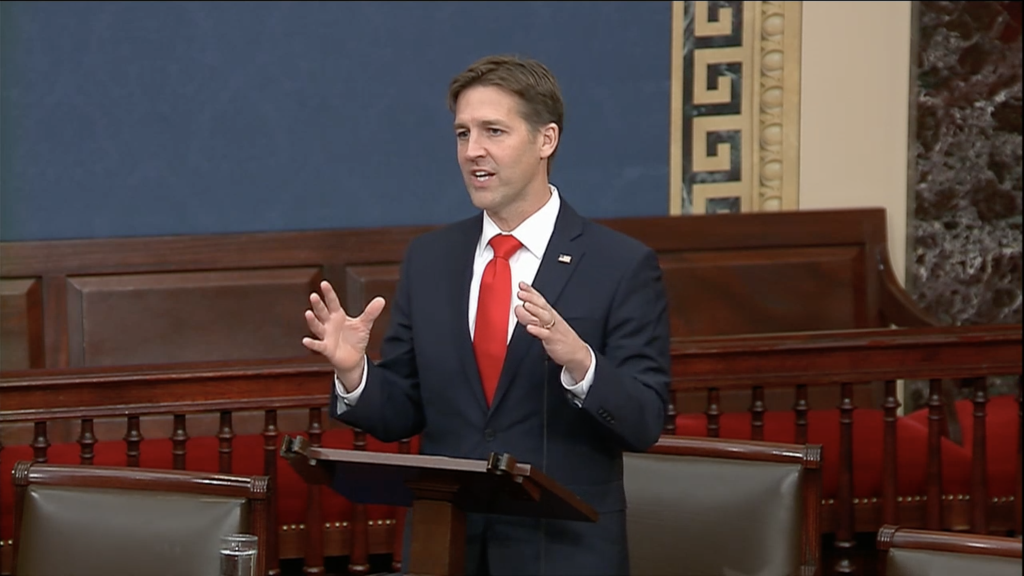 Video of the Senator’s speech is found here or by clicking on the image above.

Sasse’s full remarks are found here and below.

Mr. President, farmers and ranchers are in a tough spot. There are a lot of families on the edge of bankruptcy in my state and in ag country more broadly. And as we get closer to Christmas and New Years without a trade deal with Canada and Mexico the situation is getting bleaker. Let’s be blunt about this: By needlessly stonewalling the USMCA trade agreement, Speaker Nancy Pelosi and the House Democrats are taking Nebraska agriculture hostage. This is petty, stupid politics at its worst.

The USMCA trade deal is a free trade win for our farmers and ranchers and they desperately need this win right now.

With hard work and grit, Nebraskans have cultivated one of the most powerful agricultural economies in the history of the world. We literally feed the world and we do it with free trade because we grow so much more food than we could ever consume. We need export markets and lots of people around the world want to be consuming our ag products.

It’s pretty simple: Trade with Canada and Mexico is a win-win-win.

In 2018, Mexico and Canada bought more than $40-billion of American agricultural products. The U.S. International Trade Commission expects USMCA to increase that trade by more than $33-billion.

The USMCA trade deal is designed to reinforce those partnerships in ways that make sense for an economy that’s changed a lot since NAFTA was passed in the 1990s. In the 1990s Seinfeld was still on TV, we still watched movies on VHS tape, and we still took our pictures with these things that the pages probably don’t know, which were cameras that had film. I’ll be honest, at my house we still watch Seinfeld but we’ve happily moved on from VHS tapes. My teenage daughters set us up on Hulu streaming but I can’t make the remote work.

Over the last 20 years, we’ve seen a massive digital revolutionary change in nearly every sector of our economy. Farmers are using new tech to increase our productivity and get more out of the most fertile land on God’s green earth than people ever assumed possible. The USMCA trade deal makes the kind of basic improvements in our trading relationships with our neighbors that we need in a rapidly changing, evolving, and developing economy.  For example, it scraps the old rules about importing cars that still have cassette tape players. Chuck Grassley apparently still has a car that has a cassette tape player, but he’s proud of it so we won’t make fun of him here.

Passing the USMCA would secure long-term stability in our trade agreements with our partners across North America, and it would also send a signal to other potential partners around the world that the United States is open for business. We need to bring Japan, the European Union, and others to the negotiating table, and passing the USMCA would strengthen our position significantly in setting up those trade agreements.

But time is running out.

If we don’t pass USMCA this year, we’re going to send a very different signal to our potential partners. If Speaker Pelosi and House Democrats can’t get their act together on USMCA, they’ll be telling the whole world that we may or may not be open for business. It all depends on short-term political posturing. That’s the message they are sending now, and that’s a message that might be cemented if this calendar year ends without passing USMCA. Try running a convenience store like that and you’d be out of business in a month.

A lot of folks in San Francisco and New York City might not think much about beans and about corn prices, but a every farmer and rancher in Nebraska is beyond baffled that this no-brainer trade deal hasn’t passed yet. It’s simply in the best, long-term interests of everyone involved in the conversation. This is not something that should be slipping beyond this next year. This is something that should pass now. We should call the vote on Christmas morning if that’s what it takes. The Congress should not be leaving D.C. without passing the USMCA.

Time is running out, and we don’t want to let our farmers and ranchers face 2020 with the uncertainty and the confusion they now feel. These Nebraskans want to do business. They want to trade. We want to win.

Congress is the place where Americans deliberate about the long-term challenges that we need to face for the future of our country. But Instead of deliberation, right now what they see when they turn on their TV’s or pick up their newspapers, is just vicious partisanship and short-term posturing.

The American people deserve better than this.

The clown show in the House of Representatives shouldn’t bring everything to a grinding halt. It shouldn’t stop us from doing right by our farmers and ranchers.

The USMCA trade agreement would pass by large majorities if introduced on the House floor, and I speculate that it would get between 85 and 90 votes on this floor. Obviously, we can’t take it up until the House votes, and the House would pass it with a big majority. That means only Nancy Pelosi stands in the way of USMCA certainty for the world’s greatest producers.  Everyone knows this, and Speaker Pelosi should be scheduling the vote.