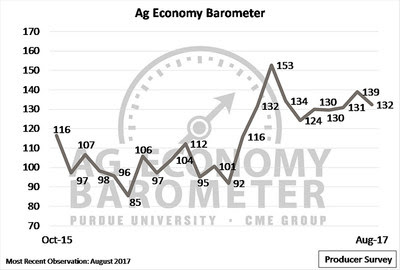 Farmer sentiment dropped seven points in August as both grain and oilseed prices fell, according to the Purdue University/CME Group Ag Economy Barometer.

While the barometer, which is based on a survey of 400 U.S. agricultural producers, showed a decrease in optimism, the August reading of 132 is still stronger than a year ago when the index read 95. Since hitting a peak of 153 in January, the barometer’s monthly readings have ranged from a low of 124 in March to a high of 139 in July.

The change in sentiment was primarily driven by the Index of Current Conditions, which fell to 122 in August after reaching an all-time high of 142 in July. The Index of Future Expectations held fairly steady, dropping just one point from 138 in July to 137 in August.

“Weakness in the Index of Current Conditions compared to July wasn’t unexpected given the recent downtrend in grain and oilseed prices,” said Jim Mintert, director of Purdue’s Center for Commercial Agriculture and principal investigator for the barometer. “For example, from July 17 to August 21 – the first days of the July and August sentiment surveys, the December corn futures contract price declined 6 percent. Prices for wheat and soybeans also weakened, generating additional concern about farm revenues and profitability.”

Researchers also sought to understand the overall mood in the agricultural community. The August survey included a question that asked producers about their neighbors’ sentiments regarding the current agricultural economy. Most – 71 percent – said that farmers in their areas were pessimistic.

The August report also includes information about shifts in farmer responses to key survey questions over the last year. In particular, the report notes that, although there has been an improvement in producer sentiment since summer 2016, conditions in production agriculture are still challenging for many farm operations. Read the full report at http://purdue.edu/agbarometer.

The Ag Economy Barometer, Index of Current Conditions and Index of Future Expectations are available on the Bloomberg Terminal under the following ticker symbols: AGECBARO, AGECCURC and AGECFTEX.

About the Purdue University Center for Commercial Agriculture