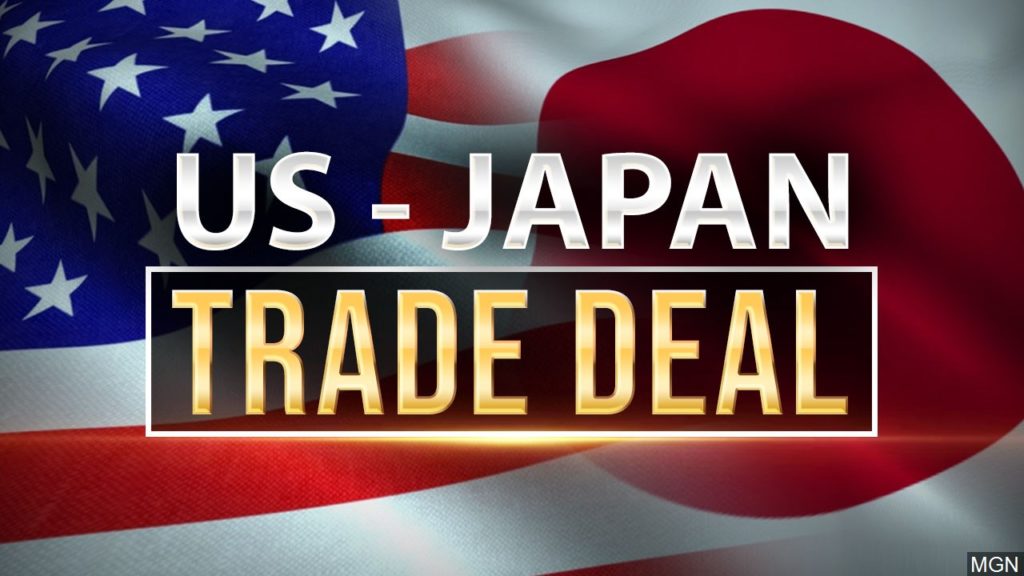 The American Farm Bureau Federation says it hopes momentum from the Japan deal that lowers or ends tariffs on U.S beef, pork, poultry, corn, wheat, almonds, wine, ethanol and other ag goods, sets the stage for similar deals with other nations.

Especially U.S. soybeans, possibly a ‘sweetener’ by the Chinese, as a delegation arrives here Thursday for renewed talks.

Trump meantime, is leaning on Speaker Nancy Pelosi, amid the political drama over Democratic impeachment efforts, to allow the US Mexico-Canada Agreement to come up for a House vote…

Pelosi earlier charged it was up to Trump to make concessions on USMCA enforcement language, while Republicans counter Democrats have slow-walked the deal worth billions for US Ag, since last December.

“This agreement between the U.S. and Japan is a victory for Nebraska’s farmers, ranchers, and ethanol producers. By securing reduced tariffs on a variety of exports like beef, pork and ethanol, this agreement expands markets for Nebraska’s great ag products. I appreciate the administration’s hard work on this deal, and look forward to continuing to work with the president toward additional trade agreements.”

Under these trade agreements, Japan will eliminate or lower tariffs on American beef, pork, wheat, ethanol, and more, as well as expand digital trade between the two countries.

“The trade deal with Japan formally signed today by President Trump makes good on his promise to strike an agreement with one of Nebraska’s most important trading partners. This deal represents a huge win for Nebraska’s farm and ranch families. When implemented it will put them on a level playing field with some of our largest competitors that are currently participating in the Comprehensive and Progressive Agreement for Trans-Pacific Partnership (CP-TPP). More specifically, Nebraska’s beef, pork, dairy, and ethanol producers, will all greatly benefit from this agreement which significantly reduces or eliminates tariffs and increases overall market access to this important strategic ally and trading partner. We are hopeful this agreement will provide a long-term economic boost and is a sign of more good things to come on the trade front.”

NCGA President Kevin Ross
“Japan is the number two buyer of U.S. corn, purchasing more than $2 billion in the most recent marketing year. This is a high value market for our livestock industry, therefore, also a major purchaser of U.S. corn through exported meats. NCGA has been a long-time supporter of trade with Japan. With many farmers struggling amid some challenging times, this is some much-needed good news. This agreement reaffirms and builds on our trading relationship with Japan and NCGA looks forward to continued work for a successful Phase 2 of these important negotiations.”

“I was deeply honored to attend the ceremony at the White House where we celebrated a bilateral trade agreement with Japan. As the top market for U.S. beef exports, Japan accounts for one quarter of our exports and roughly $2 billion in annual sales. As a beef producer, I understand the value of exports to my bottom line, and President Trump understands that increased access to foreign markets like Japan is the economic stimulus we need. We are grateful for President Trump’s leadership and for the hard work of our trade negotiators who fought hard to strengthen our access to the Japanese market. Because of their efforts, future generations of American ranching families will benefit from trade with Japan.”