The National Farmers Union officially saw Roger Johnson off into retirement late last week during a party that took place in the Farmers and Distillers Restaurant in northwest Washington, D.C.

Johnson, the NFU President for 11 years, announced back in December that he would be retiring. “Farmers Union has been a fundamental part of who I am for all my life,” Johnson says. “It’s been the biggest honor of my life to serve this organization and the farmers and ranchers that make up the membership ranks. It’s a bittersweet feeling to step away from the role of a lifetime but I need to spend more time with my wife and four grandkids.”

The Hagstrom Report says the election to replace Johnson at the top spot of the NFU is coming up March 1-3. There are three candidates to replace Johnson, including Rob Larew, NFU’s Senior VP of Public Policy; Donn Teske, president of the Kansas Farmers Union and a former NFU National Vice President; and Mike Eby, spokesperson and chair for the National Dairy Producers Organization.

The Farmers and Distillers Restaurant where the retirement celebration took place is part of a restaurant group owned by the North Dakota Farmers Union. 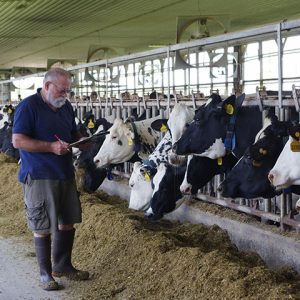