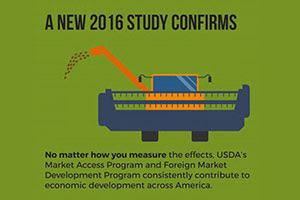 Growing and maintaining export markets is essential for U.S. farmers and ranchers, especially at a time of low commodity prices and abundant supply. USDA’s Market Access Program (MAP) and Foreign Market Development (FMD) program play a critical role in this effort and offer both farmers and taxpayers an excellent return on investment, according to a new study that looked at program impact over the past four decades.

These agricultural export market development programs, funded through the 2014 Farm Bill, have contributed an average annual increase of $8.2 billion – for a total of more than $309 billion – to farm export revenue between 1977 and 2014, the study showed. This equates to an impressive return on investment of 28 to 1.

“These programs have accounted for 15 percent of all the revenue generated by exports for U.S. agriculture over that time. To me, such a positive result is just stunning,” said Dr. Gary Williams, professor of agricultural economics and co-director of the Agribusiness, Food and Consumer Economics Research Center at Texas A&M University, who led the team doing this research.

With debate on a new farm bill beginning already, researchers also examined what would happen if federal MAP and FMD funding were eliminated. They found that under such a scenario, average annual agricultural export revenue would drop by a staggering $14.7 billion, with corresponding declines in farm cash income of $2.5 billion and significant drops in GDP and jobs.

MAP and FMD comprise the federal portion of a unique public-private partnership through which the U.S. Grains Council and approximately 60 other organizations leverage federal funds and work with USDA’s Foreign Agricultural Service (FAS) to support market development initiatives around the world.

The full study and infographics breaking down the results are on U.S. Wheat’s website, here. The executive summary is here.

More information on MAP is here; more on FMD is here.