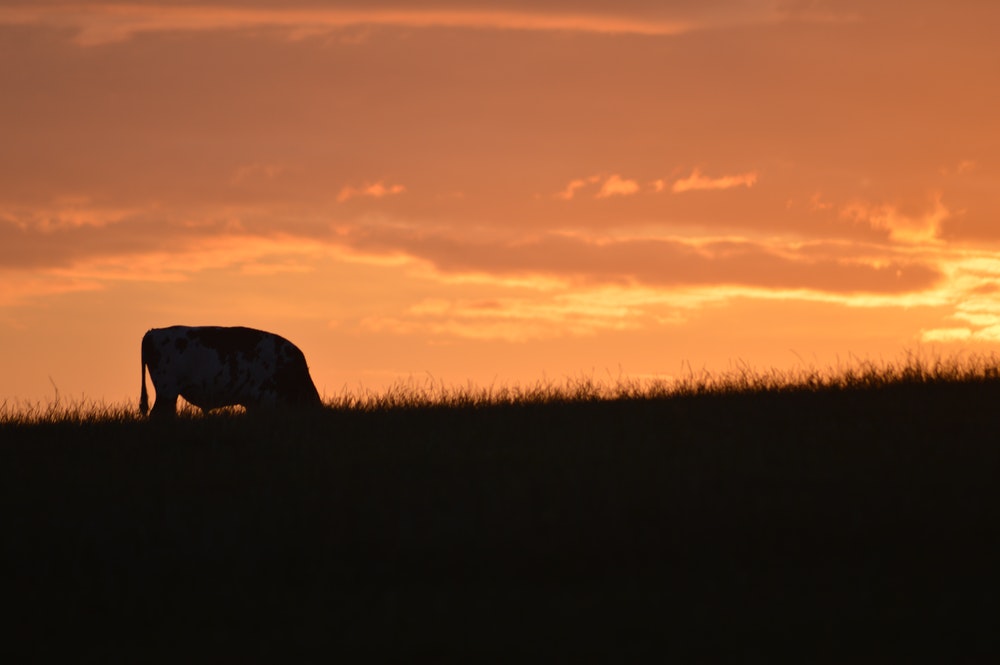 WASHINGTON, March 25, 2020 – Farmers and ranchers’ support for President Donald Trump has grown despite sluggish exports and their own worries about their financial condition as the economic slowdown triggered by the COVID-19 has developed, according to the latest Agri-Pulse poll of U.S. farmers and ranchers.

Some 72% of producers nationwide who were surveyed from Feb. 19 through March 13 said they were willing to support Trump’s reelection, up from 69% during the fall of 2018 and 45% in the spring of 2018.
Some 21% of those surveyed for the latest poll opposed Trump’s reelection. The remaining 7% don’t know how they’ll vote or refused to say. 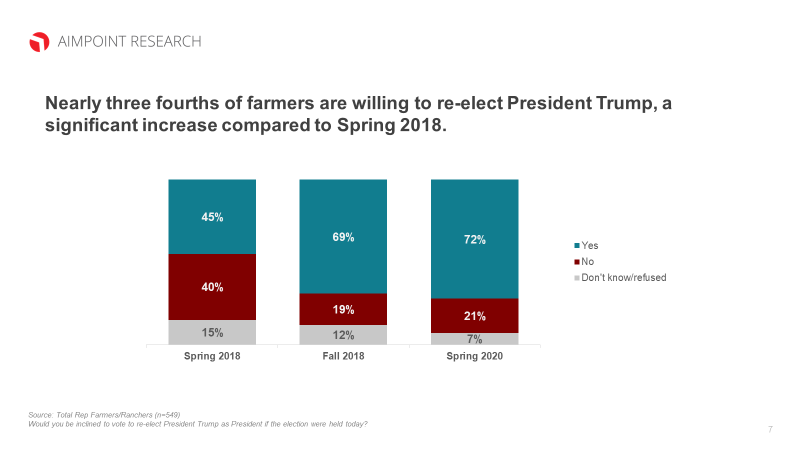 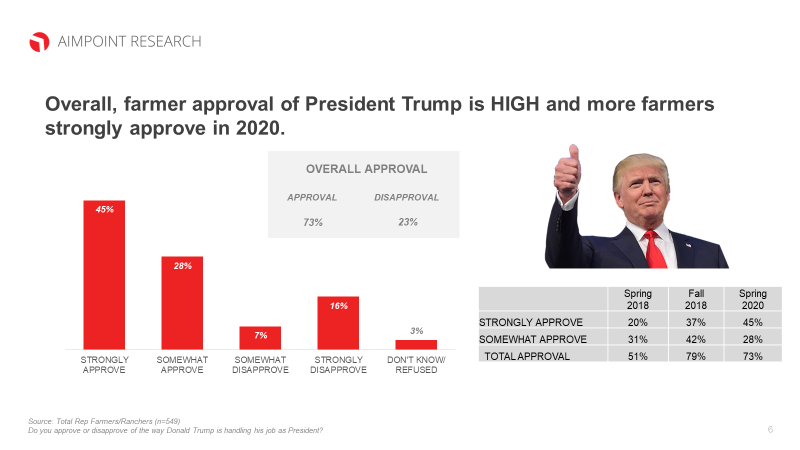 The survey of 600 producers, conducted by Aimpoint Research, included farmers and ranchers with at least $50,000 in gross farm income and was done with phone interviews as the COVID-19 pandemic was developing worldwide. The interviews started about two weeks after the U.S. Senate acquitted Trump on two articles of impeachment and ended just before the federal government called for nationwide limitations on public gatherings to slow the spread of the virus.

On March 15, the Centers for Disease Control and Prevention called for an end to public gatherings of more than 50 people for eight weeks. The following day, on March 16, Trump tightened the gathering limit to 10 people for 15 days.

According to the survey, trade remains the top concern for farmers, while climate change remains a minor concern, if even that, for most farmers. When the survey was conducted, producers’ rating of the farm economy had already slipped somewhat compared to the fall of 2018, when the trade war with China was raging.

Consistent with previous surveys, the poll found that farmers heavily skew Republican. Some 74% of producers surveyed said they voted for Trump in 2016, compared to 16% who backed Hillary Clinton. Sixty-four percent of those surveyed identify as Republican, while 13% said they are Democrats or lean Democratic; 19% of those surveyed identify as independents.

Farmers’ support for Trump is even more enthusiastic than it is for Agriculture Secretary Sonny Perdue, though both enjoy strong approval ratings.

Some 45% of those surveyed “strongly approve” of the job that Trump is doing and 28% “somewhat approve” of his performance for a combined approval rating of 73%.

In the fall of 2018, Trump’s approval rating was 79%, but the share of farmers who strongly approved of his performance at that point was lower then at 37%. An earlier poll in the spring of 2018, during the lead-up to the tariff war with China, only 51% of producers approved of the job Trump was doing.

Ninety percent of the Republican or GOP-leaning farmers who were polled said they would vote for Trump this fall, compared to 48% of the independents and 24% of the Democrats.

Among farmers who said they would vote in the Democratic primary, the overwhelming plurality, 46%, favored Vice President Joe Biden, compared to 13% for Vermont Sen. Bernie Sanders and 11% for Minnesota Sen. Amy Klobuchar.

But Biden’s share is almost certainly higher at this point; when the survey interviews were starting, many candidates were still in the race. Klobuchar dropped out March 2 and endorsed Biden.

Still, only 28% of producers in the latest poll said they “strongly” approved of the job the secretary is doing; 46% said they “somewhat” approve of his performance.

Before the national shutdown (one could argue we aren’t really in a state of national shutdown. Drastic slowdown, yes, but shutdown might be overstating it) began last week because of the COVID-19 pandemic, producers were indicating some modest optimism about the farm economy even though they clearly have lingering concerns about their own situation. The concerns are even stronger among the largest farmers, perhaps because they may be more leveraged.

Some 71% of those surveyed said financial conditions in agriculture were at least the same or better than a year ago, including 75% of farmers and ranchers with gross farm income of at least $1 million.

Still, slightly over two-thirds said they would encourage a family member to come back to the farm as a career – a number that’s very comparable to our 2018 research. 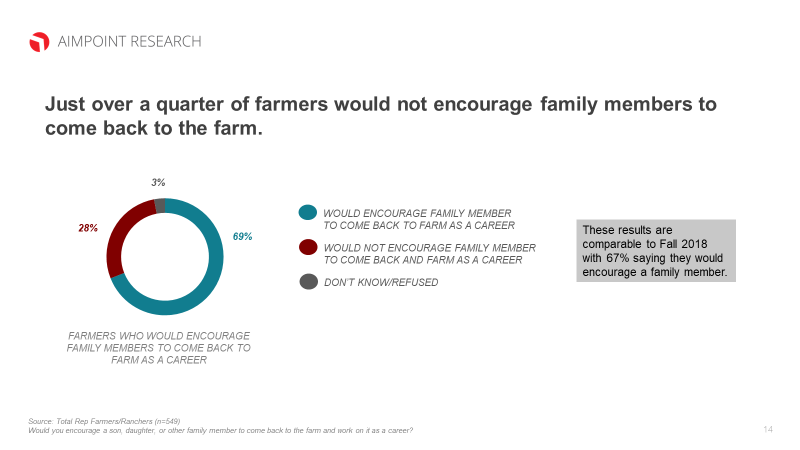 The majority of farmers were at least somewhat optimistic about the impact of the “phase one” trade agreement with China. On a scale of 1 to 10 as to how satisfied they were with the deal, 42% of those surveyed responded with a rating of between 8 and 10, and 19% scored their satisfaction with the pact at 6 or 7. 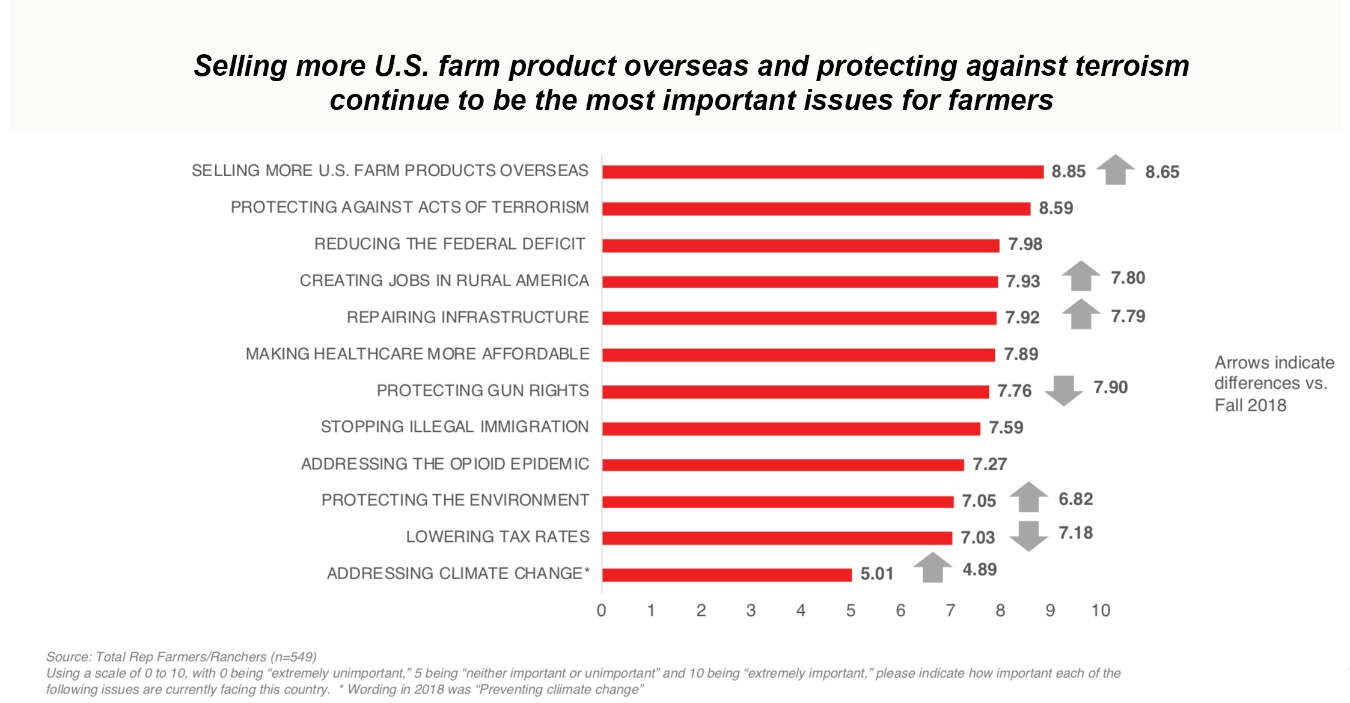 Farmers also were asked to rate each issue on a scale of 1 to 10 based on its importance to them, and trade is only growing as a top concern. Farmers gave an average score of 8.85 to the issue of “selling more U.S. farm products overseas.” That score is up slightly from 8.65 in the fall of 2018.

“Protecting against acts of terrorism” ranked second at 8.59, essentially unchanged from 2018. Reducing the federal deficit also was unchanged and ranked third at 7.98.

However, concern about the climate issue remains politically polarized. Some 62% of the farmers who identified as Democrats or said they lean Democratic rated climate change as a top concern (8 to 10 on the scale of one to 10), compared to 29% of independents and 13% of Republican farmers. 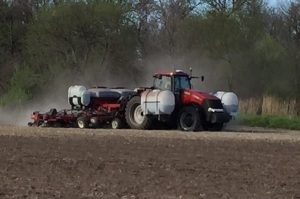