The following statement can be attributed to Craig Head as spokesman for the Nebraska Farm Bureau.

LINCOLN, NEB. – “Livestock farming is part of the heritage and fabric of Nebraska and a critical part of Nebraska agriculture. Enacting a statewide moratorium to stop new livestock farms would be the equivalent of halting the growth of rural Nebraska. Livestock farms support our rural communities, strengthen our state’s economy, and keep Nebraska strong.”

“The notion that a moratorium is needed ignores the realities of what farmers must do to build and operate a new livestock farm. Nebraska farmers go through an extensive process and must adhere to numerous local, state, and federal regulations, governing everything from where barns can be located, to how they operate for the protection of natural resources and the environment. A moratorium on Nebraska livestock farms, as has been proposed by some environmental and activist groups, would be nothing short of a disservice to Nebraska farmers, our rural communities, and our state.” 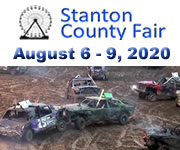