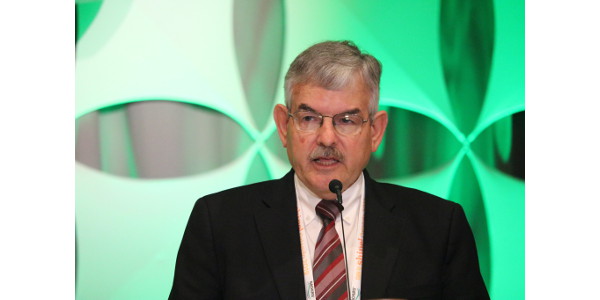 “It’s always great to see a farmer from Nebraska at the helm of a national organization,” said Dan Nerud, president of the Nebraska Corn Growers Association and farmer from Dorchester. “Lynn not only served our state’s farmers well during his year as president, but he also was a powerful advocate for all American corn growers.”

Throughout his term, Chrisp dealt with many difficult issues including trade tariffs, challenges with the Renewable Fuel Standard, small refinery waivers and misleading corn syrup advertisements from Anheuser-Busch. He traveled through corn country, Washington, D.C. and around the world advocating for American corn farmers.

“From leading us through the Super Bowl response to visiting the White House on two different occasions, Lynn had the reins during one of the most interesting years in my time at NCGA,” said Jon Doggett, CEO of NCGA. “We’re grateful for his leadership and thankful for the difference he made for corn farmers through it all. Congratulations, on a job well done.”

“While serving in leadership roles often go without recognition, Lynn deserves so much more,” said David Bruntz, chairman of the Nebraska Corn Board and farmer from Friend. “Serving as the NCGA president meant Lynn was often away from his family, friends and from the farm, but he served to improve the corn industry for all farmers. We need more farmers like Lynn willing to engage in key leadership roles. Hats off to Lynn for a job well-done!”

On Oct. 1, Chrisp will advance to NCGA’s chairman position. Kevin Ross, farmer from Underwood, Iowa, will replace Chrisp as president at that time.