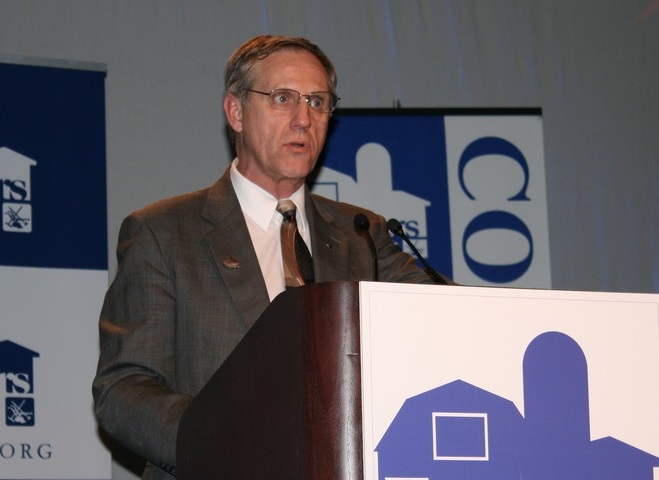 “Undermining the RFS is not only damaging for agriculture, it is a decision that harms the environment, weakens rural economies and stalls progress towards energy independence,” explained NFU President Roger Johnson. (Image courtesy of NFU)

While I am disappointed by the majority's position on labeling, I remain confident that NFU will continue to be the strongest possible advocates for all family farmers.

At its national convention last week, the National Farmers Union shifted its position on labeling of foods with genetically modified ingredients from mandatory to voluntary, and softened its support for linking eligibility for crop insurance subsidies to conservation compliance by stating that eligibility should not depend on wetlands determinations.

The changes in those positions came after wrenching debates that pitted NFU’s traditional membership base of conventional crop farmers in the Plains against farmers in other states, who are more likely to be growers of fruits and vegetables and organic crops that they sell through farmers markets or directly to consumers.

The debate reflected changes in the NFU membership over time. The National Farmers Union was founded in Texas in 1902 as an organization of crop farmers and livestock producers worried about unfair corporate dominance. As the number of farmers has gone down, Farmers Union chapters in Oklahoma and North Dakota in particular have maintained their memberships by selling insurance and declaring those insurance buyers as members.

At the same time, Farmers Union has recruited the nontraditional members in states in which there were already chapters, including Wisconsin and Minnesota, and attempted to spread its influence by recruiting small farmers in California, New England, Hawaii, and other states.

In a speech to the convention before the voting took place, National Farmers Union President Roger Johnson, a former elected North Dakota agriculture commissioner, noted the differences, but said that “it is my belief that these two types of agriculture not only have a lot in common, but in a lot of areas they can learn and benefit from one another.”

Johnson noted that some states such as Minnesota, where the large cities of Minneapolis and St. Paul have the population needed to make farmers markets and direct sales to consumers profitable, both types of farmers exist in the same state.

Johnson noted that the two types of farmers agree on the need to defend crop insurance from critics and are united in their opposition to the Trans-Pacific Partnership trade agreement — a position that puts NFU in opposition to most other farm groups.

But Johnson added that “there is an ever-increasing desire on the part of consumers to know more about their food and where it comes from.”

Those comments did not stop the divisions that occurred in debates that followed on the link between crop insurance and conservation and on the mandatory labeling of genetically modified foods.

The NFU vote to add a provision to its conservation policy to “oppose crop insurance eligibility being coupled with wetland requirements” came after a spirited debate over a proposal from North Dakota to end the group’s support for making eligibility for subsidized crop insurance dependent on conservation compliance. In North Dakota, there is a great fear that the government wants to regulate the “prairie potholes” that dot the state.

The proposal was revised after Nebraska Farmers Union President John Hanson warned that “crop insurance is under attack” and pointed out that the link between crop insurance and conservation compliance had been key to convincing conservation and wildlife groups to support the federal government subsidy of about 65% of farmers’ crop insurance premiums.

North Dakota Farmers Union President Mark Watne said that his state chapter “doesn’t want the cross compliance at all.” The majority of the state has seen 20 years of “excessive moisture,” Watne said, and farmers fear that the Natural Resources Conservation Service will expand its wetlands determinations to encompass so much land that farmers will not be able farm.

Bruce Knight, a former NRCS chief who helped broker the deal between farm and conservation groups in the 2014 farm bill, told DTN that the NFU position is not “entirely inconsistent” with the language in the farm bill as long as the farmers do not drain wetlands and continue to farm “under natural conditions.”

But Knight also pointed out that the conservation compliance provision had been vital to getting the support for crop insurance subsidies from conservation and wildlife groups. He also said that concerns the government will require farmers to pay back past premium subsidies is overblown. The policy is “forward leaning, not a clawback,” Knight said.

The bitterest fight of all was over GMO labeling. NFU’s position had been to favor mandatory labeling, but it had not taken a position on whether the labeling should be on the package or through a smart label, website or 800 number, as Agriculture Secretary Tom Vilsack has proposed.

The conventional producers wanted to end the support for mandatory labeling, but to make sure the group voted for the change, they asked for a “weighted vote,” which meant that each state would vote based on the number of members in the organization rather than the number of delegates sent to the convention. That skewed the power toward Oklahoma, which has 58,000 members, and North Dakota, which has 45,000 members. Only 20 members have to ask for a weighted vote for it to go into effect. After the vote, NFU announced that a majority had voted to change the policy but did not state a number.

Wisconsin Farmers Union President Darin Von Ruden, who has both traditional and newer farmers in his group, noted that Oklahoma and North Dakota “have 30% more members than the rest combined.”

Ohio Farmers Union President Joe Logan said his members “respect” the conventional producers’ production methods, but that he was “disappointed” to see the shift in position because he believes that the “the compact between consumers is necessary to any food system.” Logan said he expects the vote to make it more difficult to recruit members, even though the Ohio chapter will still favor mandatory labeling.

Hawaii Farmers Union United President Vincent Mina, who has brought the membership from zero to 812 farmers in only a few years, said, “I felt it was an unjust tactic used by powerful states in this organization to get their way. They are not thinking of farmers as a whole.”

Mina noted that the National Farmers Union’s position on mandatory labeling had been a way for the group to differentiate itself from Farm Bureau and that it will no longer be able to make that argument.

Mina did not go so far as one of his delegates, who called the tactic “bullying.” That delegate attempted to add a provision to the NFU transportation policy that food products moving into interstate commerce would have to be labeled for genetic modification, but it was ruled out of order.

Oklahoma Farmers Union President Terry Detrick and Watne both defended the decision to ask for a weighted vote and said “bullying” was not a fair characterization.

“In the end, we represent the majority of the membership,” said Detrick, who added that he resented the “bullying” charge because Oklahoma has been generous in helping the smaller states establish chapters, and Oklahoma had paid the air fares for many of the delegates from the smaller states. As to the criticism that many members in Oklahoma are insurance buyers, not farmers, Detrick said that many of the insurance buyers are “fourth generation progeny” of farmers and that they do pay Farmers Union dues and premiums that help fund NFU programs.

“They are still tied to the organization they grew up in,” added Detrick, who noted he has an insurance agency.

Watne noted that farmers in North Dakota growing non-GMO soybeans are getting a premium price, and he views growing non-GMO crops the same as organics — “an opportunity” to earn a premium. He added that he believes labeling is premature since “we don’t have a good definition for genetically modified organisms or genetically engineered.”

Despite the spirited debate, Farmers Union leaders from all states said they are determined to work together in the future.

New England Farmers Union President Roger Noonan said in an email, “While I am disappointed by the majority’s position on labeling, I remain confident that NFU will continue to be the strongest possible advocates for all family farmers.”

Johnson, the NFU president, said, “The issue of labeling, as well as wetland requirements for crop insurance eligibility, were both debated at length. Delegates felt the administrative backlogs on wetland determinations created unacceptable levels of uncertainty.”

Johnson concluded, “NFU is a unique farm organization, governed by its diverse grassroots membership. We serve nearly 200,000 family farmers and ranchers, both large and small. We are inclusive of everyone regardless of geography, cropping choices, or farming practices.”