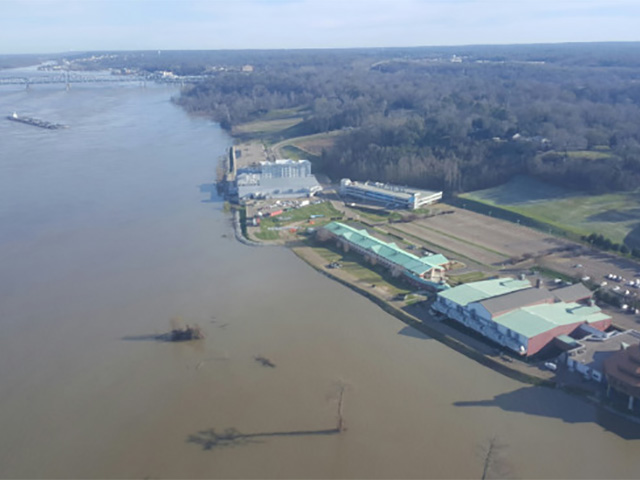 The Mississippi River at Vicksburg was at 50.2 feet on Sunday, January 17, after cresting on January 15. With flood stage pegged at 43 feet, the river there has a long way to go before it is back to normal.

In the meantime, three different tows moving barges through the Vicksburg area hit a bridge three days in a row during the week ending January 14 as the current proved too strong to safely maneuver under the bridge. At least six barges sank and will likely not be recovered until flood waters recede as the strong current and high waters make recovery dangerous.

Farther south in New Orleans, the Mississippi River was closed temporarily through New Orleans after barges collided at an oil facility in Gretna, Louisiana, a suburban town across from New Orleans. Port of New Orleans spokesman Matt Gresham told various news organizations that barges heading upriver collided with barges at the oil facility. According to Gresham, the facility was not damaged and a small amount of fuel inside a hose connected to a barge that was hit leaked into the river.

The Mississippi River at Baton Rouge was at 43.05 feet on the morning of January 18 and is expected to hit a crest of 43.5 feet midday on January 18, according to the NWS. On Sunday, January 10, the USACE opened 20 of the Bonnet Carre 350 bays in order to relieve pressure on main line levees, maintain river stages, and regulate the flow of the river from the spillway southward. As of Friday, January 15, there were a total of 124 bays opened.

It will be up to the Mississippi River (i.e. what the river does) to determine how many more bays will be opened by the Corps. However, the Corps is anticipating that a total of 150 bays may be opened, since the river hasn’t been rising as high as officials expected a few weeks ago. The spillway, located 15 miles west of New Orleans, is expected to remain open a few more weeks.

The Corps also thought it would need to open is the Morganza Spillway, located along the western bank of the Mississippi River at river mile 280, near Morganza, Louisiana. The spillway and adjacent levees help prevent the Mississippi from changing its present course through the major port cities of Baton Rouge and New Orleans to a new course down the Atchafalaya River to the Gulf of Mexico, according to Wikipedia. The spillway, also known as the Morganza Control Structure, was last opened in the 2011 floods.

However, on January 11, the Corps issued a statement saying, “Based on current Mississippi River forecasts by the National Weather Service and hydraulic modeling, the U.S. Army Corps of Engineers does not anticipate operating the Morganza Control Structure during this high-water event.”

Even still, the high water is playing havoc on the shipping industry in the Gulf. Russell told DTN at midweek that, “New Orleans and Baton Rouge Harbors are at flood stage and will remain in flood stage well into second half February.” Vessel restrictions at the Gulf outlined in DTN’s January 11 article remain in effect, and Russell told DTN the only additional restriction is, “Bar pilots at SWP (southwest pass) will reduce max ocean vessel draft from 47 ft to 43 ft effective 1/14/16. Draft reduction is a result of shoaling caused by a fast moving river.”

“Logistics and all movements are taking longer due to treacherous river conditions. Port operations slowing and backups are occurring. Allow extra cushion of time for all executions,” added Russell.