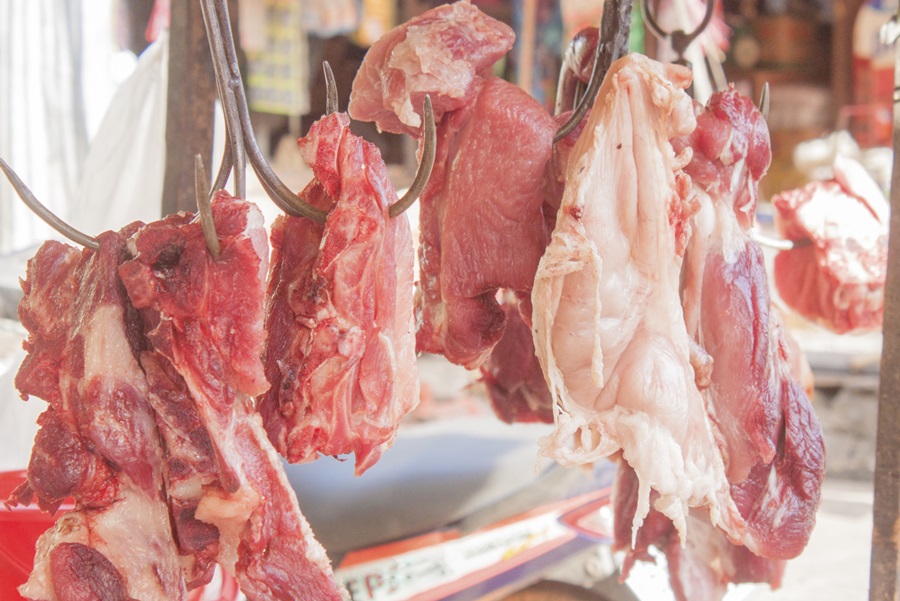 Meat is piling up in U.S. cold-storage warehouses, fueled by a surge in supplies and trade disputes that are eroding demand.

Federal data, coming as early as Monday, are expected to show a record level of beef, pork, poultry and turkey being stockpiled in U.S. facilities, rising above 2.5 billion pounds, according to agricultural analysts.

U.S. consumers’ appetite for meat is growing, but not fast enough to keep up with record production of hogs and chickens. That leaves the U.S. meat industry increasingly reliant on exports, but Mexico and China — among the largest foreign buyers of U.S. meat — have both set tariffs on U.S. pork products in response to U.S. tariffs on steel, aluminum and other goods. U.S. hams, chops and livers have become sharply more expensive in those markets, which is starting to slow sales, industry officials say.

The meat industry’s growing production already is filling the specialized warehouses built to store meat and other goods. “We are packed full,” said Joe Rumsey, president of Arkansas-based Zero Mountain Inc. The company’s five storage facilities serve as way stations for turkeys and chicken strips between processors and retailers, holding around 250 million pounds of products on any given day.

Growing meat stockpiles may bring down prices for meat-hungry U.S. consumers, along with restaurants and retailers. But slowing overseas sales and rising domestic stockpiles threaten profits for meat processors and prices for livestock and poultry producers.

The combination of trade risk and expanding meat supplies could result in “one of the biggest corrections we’ve seen in the industry in several years,” said Christine McCracken, protein analyst at Rabobank, one of the world’s largest agricultural lenders.

Some hog farmers and pork processors are beginning to scale back. Maschhoffs LLC, a privately held hog-farming company based in Carlyle, Ill., has put on hold $30 million in investments planned to expand its breeding operations and upgrade truck washes and other biosecurity measures.

“We’ve got too much capacity built in this industry if we’re not going to be exporting more product,” said Ken Maschhoff, the company’s chairman. He is instead considering expansion into Eastern Europe or South America — places where the company’s hogs perhaps can’t be raised as cheaply as in the U.S. but where he said trade policy isn’t so “geopolitically charged.”

Meanwhile, analysts say, pork processors recently have reduced some hours at plants, and some plants even have turned away hogs, Ms. McCracken said. Representatives for Smithfield Foods and JBS SA, the two largest U.S. pork processors, had no comment. A spokesman for Tyson Foods Inc. said the company’s pork production has matched available pig supplies and that Tyson continues to export pork despite the tariffs.

The meat wave had been building before the trade disputes. A string of bumper harvests in the U.S. and elsewhere slashed the price of grain, the largest cost in raising livestock and poultry. The strengthening U.S. economy has boosted domestic consumers’ appetite for meat, and rising incomes in Asia and Latin America fueled increasing meat demand abroad. Farmers, ranchers and meatpackers rushed to fill that demand, building new barns for poultry and livestock to supply new chicken and pork plants across the U.S. South and Midwest.

The U.S. Department of Agriculture projects the industry will produce a record 102.7 billion pounds of meat this year.

Cold-storage warehouses are filling up as a result. The USDA last month estimated a total 2.5 billion pounds of red meat and poultry in U.S. cold-storage facilities as of the end of May, running 8% above the prior year period — and just slightly below the record.

Exports, industry officials say, are critical to balancing out the growing supply.

“The more you store, chances are you’re going to have to export more of it,” said Altin Kalo, a commodity analyst with Steiner Consulting Group. “Even with the tariffs, there’s only a certain amount of product you can shift into the domestic channels.”

However, pork exports to China, which first implemented a 25% tariff on U.S. pork in April and this month boosted the duty to 62%, declined by 18% over the first five months of the year. Several times in recent weeks, the USDA has reported zero weekly export sales of pork to the country.

Mexico, the top export market for U.S. pork, in June implemented a 10% tariff that climbed to 20% earlier this month. While overall exports to Mexico have been running slightly ahead of last year’s total, new weekly export sales reported for the week of July 5 came in at their lowest level so far this year, according to the USDA.

For cold-storage warehouse operators, the growing meat stockpile creates opportunities. In Sioux City, Iowa, Cloverleaf Cold Storage Co. has been upgrading its technology to help track individual pallets’ location in its 18 warehouses, which co-owner Adam Feiges said has helped the company run its warehouses at 90% capacity, versus 85% in the past.

Netherlands-based NewCold, which specializes in automating the handling of frozen and refrigerated foods, opened a facility in Tacoma, Wash., earlier this year.

“There is a general lack of cold-storage capacity,” said Jonas Swarttouw, NewCold’s U.S. manager. The company is building another facility for Idaho and is talking to various meat producers about adding more room.

Zero Mountain Inc.’s Fort Smith, Ark., warehouse is filled to the brink this summer, with pallets of frozen meat rising near the 40-foot-high ceilings on towering metal shelves. It is building a new facility in Waco, Texas, and has raised wages for forklift drivers with a gift for stacking and moving tons of frozen meat.

“This summer’s going to be increased volumes, and if we want to capitalize on those, we have to do everything in our power to maximize our cubic footprint,” Mr. Rumsey said.