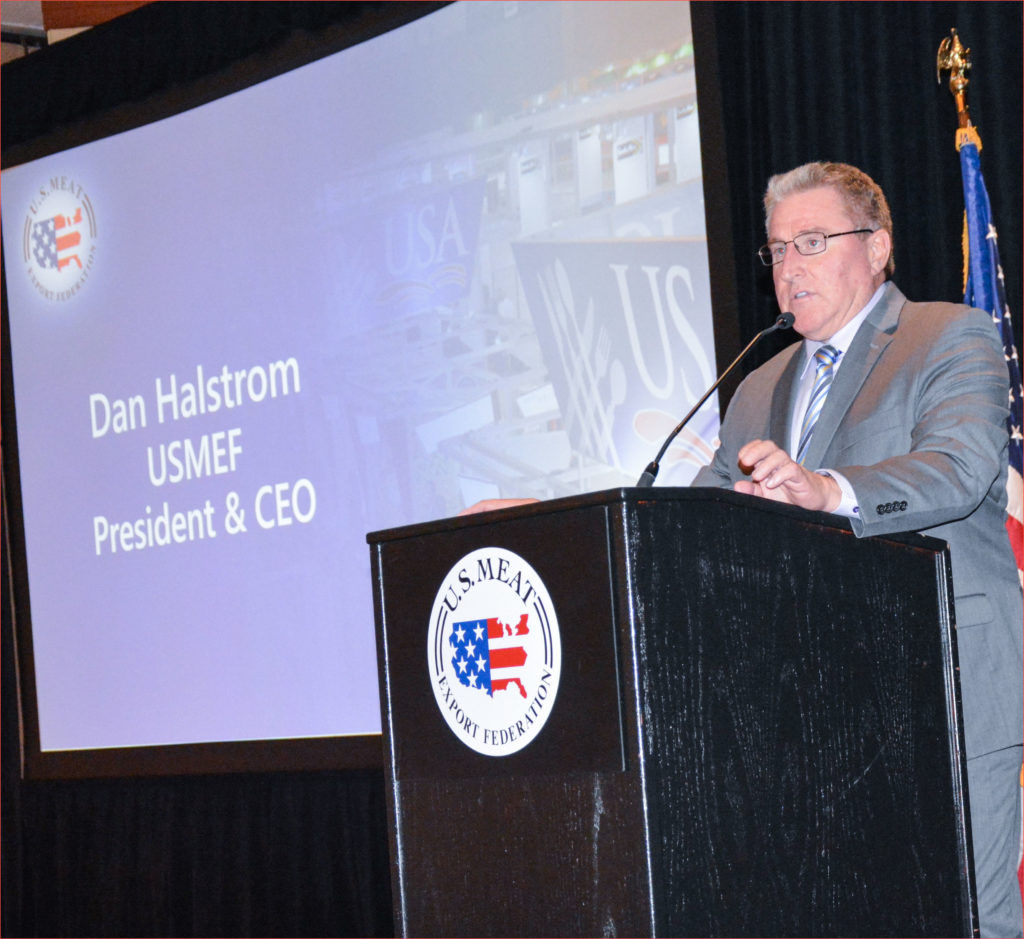 U.S. Meat Export Federation (USMEF) members gathered in Kansas City Wednesday for Day 1 of the USMEF Spring Conference and Board of Directors Meeting, with recent trade developments lending an optimistic tone to the event. In his address to the USMEF membership, President and CEO Dan Halstrom reported on Mexico’s removal of retaliatory duties on U.S. pork, Canada’s elimination of a 10% duty on prepared beef products and Japan’s lifting of longstanding restrictions on U.S. beef exports.

“When I was preparing my comments a week ago there were a lot of negative things to talk about, like the 20% duty on pork going into Mexico,” Halstrom explained. “But we received some great news with the U.S., Mexico and Canada reaching a resolution on steel and aluminum tariffs and removal of the retaliatory duties on U.S. products. So on Monday morning, the first loads of pork in nearly a year crossed the border into Mexico at zero duty.”

Halstrom said he is also encouraged by the recent launch of U.S.-Japan trade negotiations, noting that Japan’s new trade agreements with the European Union and countries participating in the Comprehensive and Progressive Agreement for Trans-Pacific Partnership (CPTPP) have put U.S. pork and beef at a significant disadvantage in the leading value market for both products. He added that gaining access to Japan for U.S. beef from cattle of all ages, which was announced last week and took effect May 20, will provide immediate, added momentum for U.S. beef exports.

“Now that the 30-month cattle age limit has been lifted, we estimate that this will provide a $150 to $200 million per year incremental boost for beef exports to Japan,” Halstrom said. “This opens up new product lines such as mountain chain tripe and tongues on the variety meat side, and for primal cuts we’ll see demand for middle meats and chuck rolls. It’s very exciting news and I want to extend a great big thank you to USDA and USTR for their work on this issue.”

“Obviously we are in a period of uncertainty and volatility, and that can sometimes lead to increased tension and division in U.S. agriculture,” Nelson explained. “That’s something we absolutely cannot afford, especially in these difficult times. So I’m excited to see such a high level of cooperation among all industry sectors.”

Wednesday’s keynote speaker was Peter Zeihan, a global trade expert and best-selling author who offered his perspective on how the current trade environment impacts U.S. agriculture and the red meat industry specifically. He noted that despite facing many challenges, the United States is remarkably well-positioned to have continued success as an agricultural exporter.

“Geographically, the U.S. has it made,” Zeihan explained. “The Greater Midwest is the single largest chunk of arable land in a temperate zone in the world, and it out-produces the next two largest agricultural zones put together. The Greater Mississippi, by itself, has more miles of naturally navigable waterway than the combined internal systems of the rest of the world. This chunk of North America is both the richest territory on the planet and the most securable. Decades of bipartisan effort have yet to screw this up, and this will not be the administration that cracks the code.”

When asked about the United States’ trade deficit, Zeihan acknowledged that the deficit has expanded under the Trump administration and that the administration’s approach to trade has been hard on U.S. agriculture. However, Zeihan feels strongly the U.S. has the upper hand in trade relations, especially with China.

“The United States holds all the cards here, and if the U.S. is willing to walk away from the game board and kick it over, it won’t be the one feeling the pain,” he said. “What you’re seeing right now with the trade deficit is a transitional period. In this moment, it looks like the United States doesn’t have as much leverage as it actually does. You feel that more than any other sector, because agriculture is the only thing that foreign governments can target. But this moment of transition isn’t going to last long. The title of my presentation was ‘At the Edge of Disorder,’ and we’re at the edge.”

The USMEF Spring Conference continues Thursday with an address (via teleconference) from Ted McKinney, USDA under secretary for trade and foreign agricultural affairs, and meetings of USMEF’s standing committees. The conference will conclude Friday with a panel discussion on the trade implications of African swine fever.