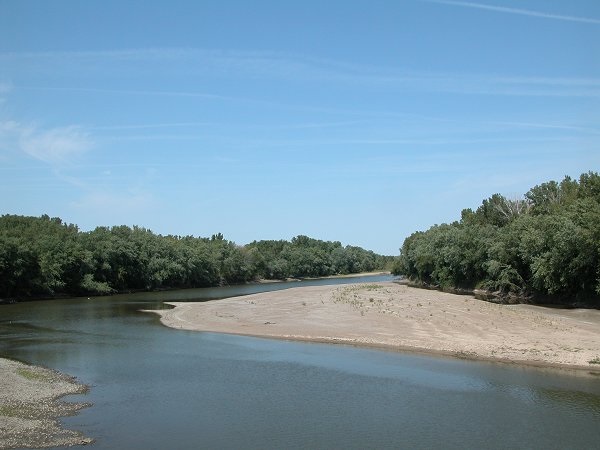 The Des Moines River near the city of Des Moines. (Image courtesy of K.Dewey/UNL)

There is a bitter legal battle underway in Iowa, Huffington Post says and important ag groups are contributing heavily to press the fight including the Iowa Soybean Association, which represents some 11,000 growers of the state’s second-most-lucrative crop. Three highly agricultural counties are involved in a controversial lawsuit brought by the Des Moines Water Works.

The lawsuit, which was filed in 2015, claims that nitrogen-rich water flowing off farms in Buena Vista, Calhoun and Sac counties pollutes the Raccoon River, which, along with the Des Moines River, provides drinking water for half a million people. The water authority wants the counties to pick up the higher treatment costs for the water.

The case has thus far been allowed to proceed, although it won’t be brought to trial until next June. Meanwhile, both sides are digging in for a pivotal Iowa Supreme Court hearing on the matter set for September.

The case is widely discussed in Iowa, and is closely watched by ag interests, since if the water utility wins, it would mark the first time in the U.S. that agribusiness was required to pay for water pollution, potentially setting a precedent with nationwide ramifications.

The Iowa Soybean Association (ISA), which previously contributed $65,000 for the counties’ legal expenses, considers the case a “must win.” It also argues that the lawsuit is an “unfortunate distraction” from the voluntary approaches to solving the state’s nutrient runoff issues that it advocates. For example, ISA’s CEO Kirk Leeds says the suit is threatening progress the state has made over the past 15 years in implementing practices to mitigate runoff. The ISA pointed to the over 970,000 acres Iowa farmers have enrolled in the federal Conservation Reserve program as further signs the state’s industry is on the right track toward addressing the problem.

Stowe’s utility has been spending a lot of money, too, he says — seven figures’ worth of extra treatment costs to ensure the drinking water delivered to customers is safe. He argues that the Des Moines system is home to what he calls the “world’s largest” nitrate removal facility. The plant is in need of repairs and expansion, he said, thanks to the historically high amount of nitrates they’ve had to remove from drinking water. EPA sets a maximum contaminant level for nitrates of 10 milligrams per liter. Anything higher needs to be removed by water providers.

In 2013, when nitrate levels in the source water reached a record high, the utility’s tab for additional treatment costs and lost revenue totaled $900,000, the Des Moines system said. Last year, it spent $1.5 million on denitrification efforts.

Stowe say his nitrate removal facilities must be expanded to keep up with increased nitrates in the water. He argues that tile drainage systems used by the upstream farms to reduce crop flooding should be identified as “point sources” of pollution under the federal Clean Water Act, from which they traditionally have been exempt.

John Rumpler, senior attorney at Environment America, a Boston-based nonprofit, called the case a “huge, precedent-setting” matter. His group published a report last month linking nutrient runoff from agriculture to the growth of algae blooms and dead zones that have devastated ecosystems and damaged local economies in places like Lake Erie, the Chesapeake Bay and the Gulf of Mexico. EPA has also linked nutrient runoff to acid rain and air pollution.

Some Iowa farmers have recognized the runoff problem, too, and are planting cover crops on some fields. However, Huffington Post points out that Iowa’s 470,000 acres of cover crops in 2015 are still a small share of the 26 million acres of statewide cropland. The Iowa Farm Bureau argues that “this is a 35% increase over the previous year,” but the Huffington Post points out that it is “still less than 2% of the total cropland.”

Stowe also argues that regardless of its outcome, the suit challenges the state’s political status quo, “which he says has favored agricultural interests for too long.” If the Des Moines Water Works were to lose and continue to pass on costs to their consumers, “there will be a political impact,” Stowe said. “Our customer base will more clearly understand why they are paying more, so we think we win anyway. We will be the long-term winners no matter what happens in our legal case.”

Certainly, the Iowa case is one of several that indicate strong urban efforts to limit ag related pollution of important water sources. These are important, and have the potential to sharply increase ag regulations and should be watched closely as they proceed, Washington Insider believes.