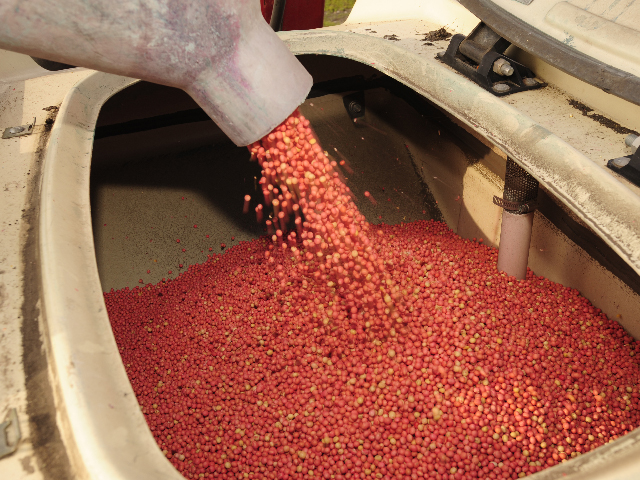 Soybeans will still be treated with neonicotinoid insecticides in 2016, but that could change when the EPA finalizes its economic assessment of the practice. (DTN photo by Jim Patrico)

The Environmental Protection Agency (EPA) has missed a few of its 2015 deadlines in its scheduled review of neonicotinoid insecticides. Among them is the finalization of an economic assessment of the use of neonicotinoids in soybean seed treatments, which the agency released in October of 2014.

In the preliminary draft of that assessment, EPA concluded firmly that neonicotinoid seed treatments have no economic benefit for Midwestern soybean farmers. Often called neonics, the chemicals are added to most corn seed and roughly half the soybean seed sold, primarily to combat sucking insects and soil pests. As companies, farmers, university and Extension scientists and environmental groups rushed to defend or castigate the report’s conclusions, more than 41,000 comments piled up on the EPA’s public posting of the report.

A year later, the EPA has missed its deadline to finalize the report, and what that finalization will eventually mean for the future use of neonicotinoids is as much mystery as its timing, industry officials told DTN.

The report’s public comment page quickly filled up with farmers defending their use of neonicotinoid seed treatments and environmentalists calling for their immediate ban. A split emerged between university and Extension scientists who added their opinions, with researchers from the deep South condemning the report and Midwestern and Southeastern scientists affirming it. (See the comment page here: http://1.usa.gov/…)

Now more than a year later, a wary calm has settled as EPA sorts through tens of thousands of these comments and works on its final conclusion.

According to a schedule outlined in President Barack Obama’s “National Strategy to Promote the Health of Honey Bees and Other Pollinators,” companies expected a decision by the end of 2015, Valent and Bayer officials said. That deadline is not going to happen, EPA spokesperson Cathy Milbourn told DTN, and there is no official timeline going into 2016.

“As you look at the docket, there are quite a significant number of comments in there, some from other regulatory agencies as well,” Syngenta’s regulatory team leader John Abbott noted. “I think it takes a bit of time to sort through those comments and do their due diligence to make sure the final version is thorough and complete.”

COMPANIES IN THE DARK

No one has a good grasp on what a finalization of the EPA’s economic assessment would mean for neonicotinoid registrations, in part because the assessment’s release was such a surprising and unprecedented move for the agency.

“Typically EPA looks at the risks of a product first and then decides if they are small or large and how the benefits to production compare,” Bayer CropScience’s product safety manager Iain Kelly explained. “In this instance, they have started with the benefits before they completed the risk assessment. So we do not know what EPA will do in this instance, because already it’s not following normal procedure.”

Syngenta is remaining optimistic: “If one believes that the process will be robust and complete, then I think the data would support continued use of Thiamethoxam for these purposes,” Abbott said of his company’s lone neonicotinoid holding. “For that reason, we believe that the use will continue.”

The EPA isn’t set to make final decisions on the registrations of any neonicotinoids until 2016 and 2017 at the very earliest. But there is precedent for the agency releasing label changes and restrictions on products outside of the registration review process, Abbott added. Namely in 2014, the agency issued a set of restrictions and label changes for foliar neonicotinoid sprays in an effort to protect pollinators.

“Could there be some label modifications and slight changes as a result? Those do happen fairly regularly,” Abbott said. “They can and have made changes to labels outside of the registration review process.”

So far, no large-scale alternatives exist for neonicotinoid insecticides in seed treatments, but both Bayer and Syngenta said they are working on additional technologies.

“One of the things that is very concerning is that in row crops, there are neonicotinoids, organophosphates, and pyrethroids, and all of these are under regulatory action at EPA at the present time,” Kelly told DTN. “It’s not a good situation for growers to be in, so yes we are looking for other things. The research is not easy, but absolutely we are looking for better technologies; we are looking at ways we can use better genetics, biologicals, and seed treatments together to improve yields.”

For now, with no EPA decisions in 2015, growers should expect a normal growing season with the usual insecticide seed treatment offerings, Abbott said.

“We’re coming into the 2016 season, and a lot of growers have already made decisions with what they’ll plant and what products they will be using on the crop themselves and within seed treatments, so I would anticipate that growers will follow their normal process for 2016 and produce an abundant crop as they always do,” he said.