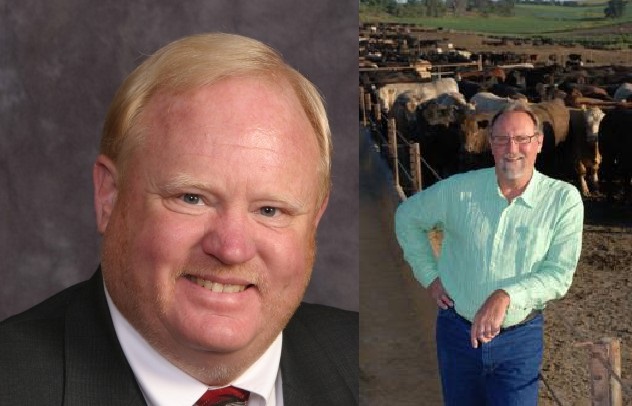 (Falls City, NE) Today, Charles W. Herbster of Falls City, Neb., National Chairman of the Agricultural and Rural Advisory Committee for the Donald J. Trump Campaign for President, announced two new Co-Chairs from Nebraska for the advisory committee. Steve Nelson of Axtell, Neb. and J.D. Alexander of Pilger, Neb. add additional value and leadership to the  agriculture committee.
National Chairman Herbster said, “Steve and J.D. are two outstanding Nebraska agriculture leaders for our country. I am pleased they are joining me in leading the agricultural advisory committee for Donald Trump who is clearly the only candidate with the best interests of the agricultural community at the heart of his policies.”
Herbster is a fifth-generation farmer, Owner of Herbster Angus Farms, and Owner and Chief Executive Officer of the Conklin Company.
Nelson is the current President of the Nebraska Farm Bureau and has been involved in farming all of his life. He farms near Axtell in south central Nebraska and produces irrigated corn, hybrid seed corn and soybeans.
Alexander, a third-generation farmer-feeder in Pilger in northeast Nebraska, has been an active industry volunteer for more than two decades. Alexander is the former President of the National Cattlemen’s Beef Association and a past President of the Nebraska Cattlemen Association.
Nelson said, “Donald Trump cares about the most important issues – jobs and the economy, and he respects the tremendous role agriculture plays in the well-being of our country. His commitment to reducing regulations, repealing WOTUS, and limiting the over-reach of the EPA and the rest of the federal government is certainly needed. When you look at the candidates, it is clear that Donald Trump is the only candidate who will help our industry thrive.”
Alexander said, “After eight years of the Obama administration, our country desperately needs a new direction and a new voice that cares about agriculture. Donald Trump is a businessman, not a career politician. He will work for increased exports and expand international opportunities that are vital for our industry. It will be a welcome opportunity for agriculture to have a seat at the table.”
Herbster added, “Like Donald Trump and myself, these individuals care deeply about agriculture and work to solve the issues that impact our rural areas every day. Donald Trump knows and respects talent and he will be a champion for agriculture and the United States as we work to make America great again.”
Nelson and Alexander join Herbster and a host of agricultural leaders throughout the nation supporting Mr. Trump for President of the United States. The original Trump agricultural committee announcement can be found HERE.
© 2020 Nebraska Rural Radio Association. All rights reserved. Republishing, rebroadcasting, rewriting, redistributing prohibited. Copyright Information
Share: