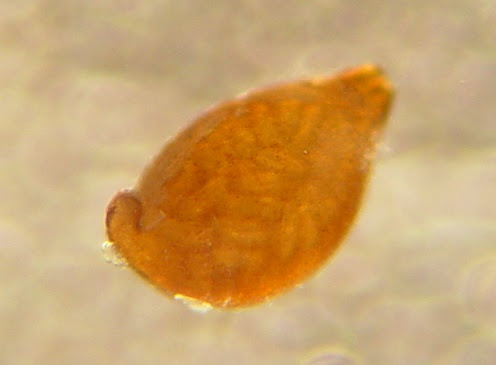 Eggs within a cyst (dead female) can survive in the soil for years. (Photo: Iowa State University)

Waukesha, Wis. (June 26, 2019) – Farmers looking for any bit of good news in all of the rain-soaked suffering this spring are asking if the extreme overabundance of moisture has drowned Soybean Cyst Nematode (SCN). “Unfortunately, the answer is no,” says Greg Tylka, Iowa State University nematologist and leader of The SCN Coalition.

Nematodes are worms (animals) that require oxygen. “They absorb oxygen through their body wall or cuticle, which is made almost exclusively of proteins (and no chitin),” he adds. “Waterlogged soils may have greatly reduced levels of oxygen. But many plant-parasitic nematodes, including SCN, can survive long periods of time with little oxygen.”

In the early 1970s, scientists at the University of Arkansas conducted experiments to determine whether SCN could survive in flooded conditions. They found that hatched SCN juveniles survived in water up to 630 days – and probably longer, but the experiment ended after 630 days. Scientists also tested survival of SCN in flooded soils, and the juveniles survived seven to 19 months depending on soil texture. The research paper is available online.

SCN eggs can survive in a dormant state for many years in the absence of soybeans, particularly the eggs that occur within the body of the dead female or cyst. “Typically, the eggs are more tolerant of environmental stresses than hatched juveniles. So it’s likely that SCN eggs in infested fields are not adversely affected by waterlogged soils either,” Tylka explains.

A bit of additional bad news: Soil moved by erosion due to heavy rains and floodwaters may spread SCN to new places. It is not possible to quantify the magnitude or frequency of this happening. And considering how widespread SCN already is in the Midwest, perhaps the movement of SCN in soil moved by rainfall and floodwaters will not have a great impact.

“Nonetheless, it is quite possible that some fields may have had SCN introduced in soil from other fields this spring,” Tylka says. “Consequently, soil samples should be collected this fall to test for SCN in fields where soybeans will be grown in 2020.” Guidelines for collecting SCN soil samples can be found online along with a list of university and private laboratories in the United States that process soil samples for SCN.

A possible silver lining to the storm clouds

Multiple SCN generations – likely four to six or more – occur throughout a normal growing season. And it takes about 30 days for SCN to complete a single generation once soils warm up in late spring and summer.

According to Tylka, “If soybean planting is delayed by several weeks, as in 2019, there likely will be one or two fewer generations of SCN occurring during the season. And that means less of an increase in SCN numbers simply because there are fewer weeks for SCN to reproduce on soybeans in 2019.

“But beware! The potential for large increases in numbers and for severe damage always exists with SCN, especially if the weather turns hot and dry – ideal conditions for SCN reproduction,” he continues. “The numbers of SCN eggs in soil can build up quickly over multiple generations.” For example, a few hundred eggs can increase to nearly 40,000 in just three generations, as shown in the infographic available online.

Manage SCN for the long term

For more information about the biology and management of SCN, visit thescncoalition.com.