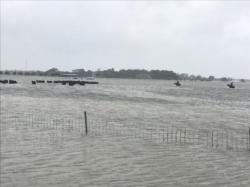 OMAHA (DTN) — Farmers and ranchers in eastern Texas and western Louisiana were coping with continued torrential downpours on Wednesday even as floodwaters receded in other areas of Texas hit by Tropical Storm Harvey.

The Texas Farm Bureau on Wednesday created a relief fund focusing on agricultural producers in southeast Texas hit by the storm that first struck Texas as a Category 4 hurricane.

“One hundred percent of everything we collect will go to them and we are setting up the infrastructure for implementing that right now,” said Gene Hall, a spokesman for the Texas Farm Bureau.

The website will collect funds, but also provide details on where to send supplies. The link for the fund should be up on the farm bureau’s website by Thursday. (See www.Texasfarmbureau.org)

Texas Gov. Greg Abbott said Wednesday that heavy rain was continuing to make it hard for response efforts in parts of the state even as floodwaters were receding around Houston. Roughly 14,000 members of the National Guard have been activated, but cable news networks were still showing dramatic rescues by private citizens.

“The worst is not yet over for southeast Texas,” Abbott said.

Beaumont, Texas, got another 10 inches of rain in a 24-hour period, but just southeast in Port Arthur, Texas, the city got closer to 25 inches. A shelter for evacuees in Port Arthur ended up having to be evacuated and the mayor on Wednesday called for private citizens to help with rescue efforts.

“They are putting boats in at a shopping mall about 5 miles from Port Arthur to get there and rescue people,” said Chuck Kiker, a cattle producer near Beaumont. “It’s just unfathomable, the water.”

Kiker said Wednesday that most of his cattle were safe, but his dad had a small group of cattle standing in deep water that he could not reach. It’s a challenge moving the cattle because they don’t want to step off a high spot, especially if the cattle have to move through deeper water.

At mid-afternoon Wednesday, Kiker said some rescuers were headed to Fannett, Texas, about 20 miles south of Beaumont, because a levee break threatened the town.

Harvey was located north-northwest of Lake Charles, Louisiana, and moving toward the north-northeast near 8 mph and this general motion is expected to continue through Thursday. A turn toward the northeast is expected Thursday night and Friday. On the forecast track, the center of Harvey should move through southwestern and central Louisiana tonight, then move through northeastern Louisiana and northwestern Mississippi Thursday and Thursday night.

Maximum sustained winds are near 45 miles per hour with higher gusts. Weakening is forecast during the next 48 hours as Harvey moves farther inland, and the storm is expected to weaken to a tropical depression Wednesday night.

The Texas Department of Transportation showed one small cattle drive trying to move a herd to higher ground. (See https://twitter.com/…)

Texas A&M AgriLife Extension noted USDA estimates there are 1.2 million cattle in the 54 counties most affected by Harvey just in Texas. Livestock producers throughout the region have been trying to move animals, if they can get to the cattle. At least some producers took heed of the forecasts ahead of time and moved cattle before the storm.

“But this storm is unprecedented. That’s the word you hear more than any other, I think,” Hall said. “Just like the city of Houston knew they would have flooding, they didn’t think it would be like this. I’m sure there are ranchers who were caught off guard and did not realize it would be like this.”

As DTN reported earlier, rail lines and ports have halted because of the storm’s damage and continued flooding. A grain buyer in southern Texas also told DTN that the major issue with grain movement now is power and communication. Most places are without power or telephone, but some elevators are asking for quick shipment of un-contracted grain due to bin damage. Several elevators, however, remain closed until further notice.

John Robinson, a cotton-marketing economist with Texas A&M AgriLife Extension Service said harvest was only about 40% complete in the area hit by Harvey.

“I have also heard there are 300,000 to 400,000 bales worth of cotton still on the stalk in the affected region,” Robinson said. “Assuming those estimates are accurate, there are a number of possible outcomes.”

High winds obliterated cotton stalks and lint, Robinson said. Farmers hit with fields like that face a 100% loss on their crop. “Second, some fields will face not only a lot of wind and rain damage, but the uneconomical task of drying out, harvesting and selling degraded cotton lint that is heavily discounted in price.”

The USDA Corpus Christi Classing Office for cotton had estimated Texas would have a 2-million-bale crop.

Cotton prices continue to tick upwards, settling at 70.86 cents a pound, up .88, on the CME December contract Wednesday. Robinson said he expects cotton markets will settle once the uncertainty from Hurricane Harvey fades. “The loss of 300,000 bales does not translate to more than a penny or so impact from the base price or the futures market (contract) price,” Robinson said. “The main aggregate market effect will be figured into the cash market with higher premiums being offered for scarcer, good-quality cotton for the next couple of months.”

Officials have listed several numbers for farmers, ranchers and residents to contact.

The Texas Animal Health Commission has established a hotline for people looking to donate, volunteer, offer animal shelter or relocation and report live or dead livestock at 512-719-0799.

The Federal Emergency Management Agency is looking for volunteers. To help or donate, go to www.Nvoad.org.

For assistance, go to www.Disasterassistance.gov or call 800-621-FEMA.