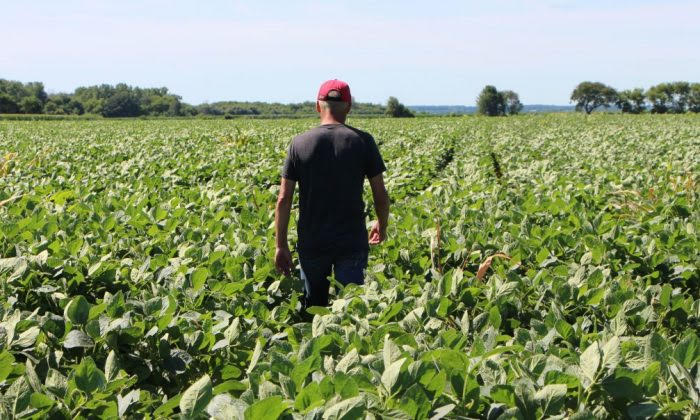 A Farmer walks through his soy fields in Harvard, Illinois on July 6, 2018. (Nova Safo/AFP/Getty Images)

The rate of farmer suicide has been on the rise across the United States and Senators Chuck Grassley (R-Iowa) and Jon Tester (D-Mont.) recently introduced the Seeding Rural Resilience Act to curb it. The senators want to spread awareness about mental health on the farm.

“Our bipartisan bill would empower people who are in a position to identify farmers who need help to get them help,” said Grassley in an op-ed on his website on Dec. 26.

The Iowa lawmaker said farming is full of uncertainties as it is at the “mercy of Mother Nature” and leads to sleepless nights and anxiety.

“This year brought extra layers of uncertainty. Excessive rain and snowmelt in April led to prevented and delayed planting. The October snowstorms stalled field work for many farmers across the upper Midwest.

“The itch to get behind the wheel of the combine brings sleepless nights and weighs heavily on the minds of farmers already anxious about matters beyond their control,” wrote Grassley, adding that he wants farmers to break their silence and talk about mental health.

He quoted the Center for Disease Control and Prevention in his op-ed and said the rate of suicide is 45 percent higher in rural America than in urban areas.

“Farmers have higher rates than the general population. A number of factors may contribute to the rural-urban disparity, including geographic isolation, distance from health care services, stigma associated with obtaining mental health care services, and financial pressures stemming from the downturn in the farm economy,” he said.

According to a study by the University of Iowa (pdf) published in 2014, the suicide rate among farmers and ranchers between 1992 and 2010 was 3.5 times higher than the general population. The National Farmers Union says mental and behavioral health is a major concern in farming communities.

“We’re seeing an increase in the number of farmer suicides reminiscent of the 1980s farm crisis. The desolation of losing a farm that had been in a family for generations was too much for too many farmers to handle. The loss of life and livelihoods still echoes throughout farming communities decades later,” said Grassley, emphasizing that he has championed for health care services in rural America for decades.

The Seeding Rural Resilience Act was introduced in the Senate on Oct. 15, and if passed would launch a voluntary training program for the government employees who work directly with farmers.

“Specifically, our bill would provide training to flag potential warning signs and risk factors and direct the USDA (United States Department of Agriculture) to develop best practices to respond to mental stress impacting farmers. The USDA and Department of Health and Human Services also would be tasked with creating public awareness campaigns,” said Grassley.