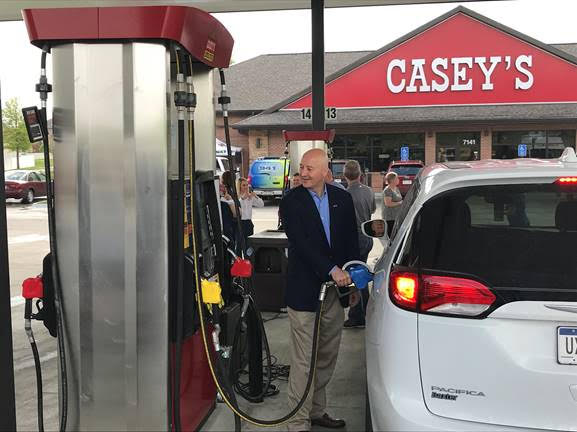 Governor Ricketts fills a customer’s tank with E15 at a new flex fuel pump after designating May as Renewable Fuels Month.

On Friday, Governor Pete Ricketts proclaimed May as Renewable Fuels Month in Nebraska during a ceremony at Casey’s General Store on N 156th Street.  Following the official proclamation, the Governor stepped up to the pump to fill customers’ tanks with E15 to promote higher ethanol blends.

“Casey’s is demonstrating its commitment to Nebraska by adding this blender pump,” said Sarah Caswell, administrator of the Nebraska Ethanol Board.  “This infrastructure will enable the station to offer Nebraska consumers more choice at the pump to use fuel that is cheaper for them and better for the state’s economy and environment.  E15 is safe to use in 2001 and newer cars.  Now, Nebraska drivers will have more opportunity to choose to use that higher ethanol fuel blend.  The more ethanol we use, the better for our air and economy.”

Nebraska is the nation’s second-leading producer of ethanol.  The state’s 25 ethanol plants have capacity to produce 2.6 billion gallons of the fuel each year.  Thanks to the efforts of the 1,400+ rural Nebraskans who work directly in ethanol production, the state’s ethanol output has reached record highs of 2.2 billion gallons per year.  The total value of Nebraska’s ethanol production exceeds $2.8 billion.

Nebraska is pioneering the use of high-level ethanol blends.  On June 3, the state will commence an EPA-approved pilot program to study the use of locally sourced E30 in conventional state-owned vehicles.  The research on these vehicles’ mileage and maintenance needs will help demonstrate how E30 can both reduce consumers’ costs and contribute to a cleaner environment.

There are now more than 100 fuel stations retailing higher ethanol blends throughout the state.  A map of these locations is available by clicking here.

Ethanol produced in Nebraska is made from corn and the process yields distillers grain—a high-protein livestock feed—as a co-product.  A vibrant ethanol industry creates more opportunities for farmers by increasing demand for corn, as well as for ranchers by providing a close-by supply of premium feed.

“We know ethanol is a great product, and we work hard to share that message,” said Kelly Brunkhorst, executive director of the Nebraska Corn Board and the Nebraska Corn Growers Association.  “Through Renewable Fuels Month, we’re able to directly connect with consumers to discuss the benefits of American Ethanol.  The fact that increased ethanol blends are locally produced, naturally higher in octane, renewable, cleaner-burning, and less expensive are all messages that resonate well with consumers.  American Ethanol is a great choice for our nation’s drivers and a great choice for Nebraska.”