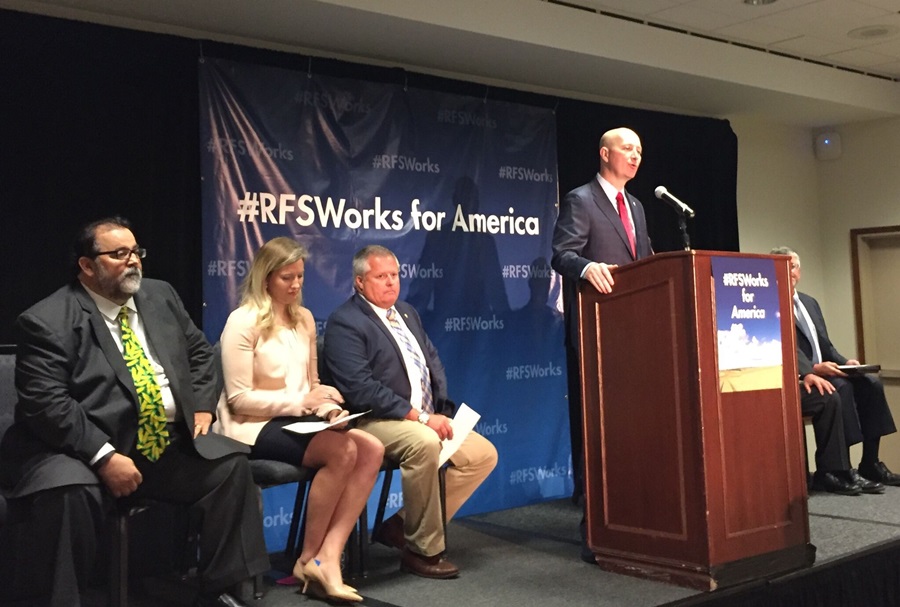 Nebraska Gov. Pete Ricketts at the RFS Works News Conference in Kansas City following his testimony before the EPA. (Courtesy of Gov Ricketts)

Nebraska Governor Pete Ricketts and ethanol advocates called on the Environmental Protection Agency (EPA) to maintain the Renewable Fuel Standard (RFS) and to scrap a proposal that would slash the nation’s renewable volume obligation (RVO) for the second consecutive year.

Testimony on the proposed changes is being heard in Kansas City, MO where Governor Ricketts, Vice Chair of the Governors’ Biofuels Coalition (GBC), testified against proposed changes on behalf of the State of Nebraska and GBC members.

“A strong RFS means more jobs here at home, greater energy security, and a cleaner environment,” said Nebraska Governor Pete Ricketts. “The biofuels industry supports more than 852,000 American jobs and creates fuel we need to help our country become energy independent.  It also stimulates investments in states like Nebraska, where we are on the forefront of research, development, and infrastructure for first- and second-generation biofuels.”

“Ethanol is an excellent example of the type of industry that can grow Nebraska by adding value to and supporting Nebraska’s other agriculture industries like corn and cattle production, increasing job opportunities for Nebraska workers, and supporting Nebraska communities,” added Nebraska Energy Office Director David Bracht.  “Nebraska currently is working to double the number of blender fuel pumps through a partnership with the U.S. Department of Agriculture to serve the nearly 200,000 flex fuel vehicles in the state.”

“It is important to Nebraska the EPA recognize the benefits of corn based ethanol and fulfill the commitment made by the federal government to the industry as they determine the Renewable Volume Obligations.”  said Nebraska Director of Agriculture Greg Ibach.  “While providing consumers with a high quality, clean burning, domestic energy source, a strong ethanol industry is a valuable contributor to Nebraska’s economy.  The ethanol industry creates economic vitality for Nebraska’s rural communities through the creation of jobs, local markets for commodities, and co-products for our livestock industry.”

“It is important to remind the EPA that Congress intended for the RFS to provide a robust schedule for the production and marketing of renewable biofuels like ethanol,” said Nebraska Ethanol Board Administrator Todd Sneller.   “As the second largest ethanol producing state, Nebraska has clearly demonstrated the productive capability to meet the law.  The EPA should not undermine our collective potential to produce renewable fuels that create economic growth, cleaner air, lower fuel costs, and more diverse fuel choices for consumers.”

“Although the EPA has increased the RVO from last year, we continue to be frustrated that they once again are proposing requirements below statute,” said Nebraska Corn Board Chairman David Merrell, a farmer from St. Edward.  “The Renewable Fuel Standard is working for America.  It has helped make our air cleaner, spurred investment in rural communities, and created high-tech jobs.  Any reduction in the statutory amount takes us backwards and ultimately hurts Nebraska’s corn farmers. ”

“The EPA continues to incorrectly claim that ‘supply’ is somehow synonymous to ‘demand’ and ‘distribution capacity,’” said KAAPA Ethanol CEO Chuck Woodside of Minden.  “Congress’ intent was crystal clear: if the physical supply of renewable fuels is available to fulfill the statutory volumes, then refiners are obligated to distribute those volumes to consumers.  The EPA’s proposal continues to allow refiners to avoid part of this legal obligation.  The EPA may grant a general waiver based on an ‘inadequate supply’ of renewable fuel only if the biofuels industry lacks the capability to produce the required volumes of renewable fuel needed to meet the statutory requirements.  That is clearly not the situation today.”