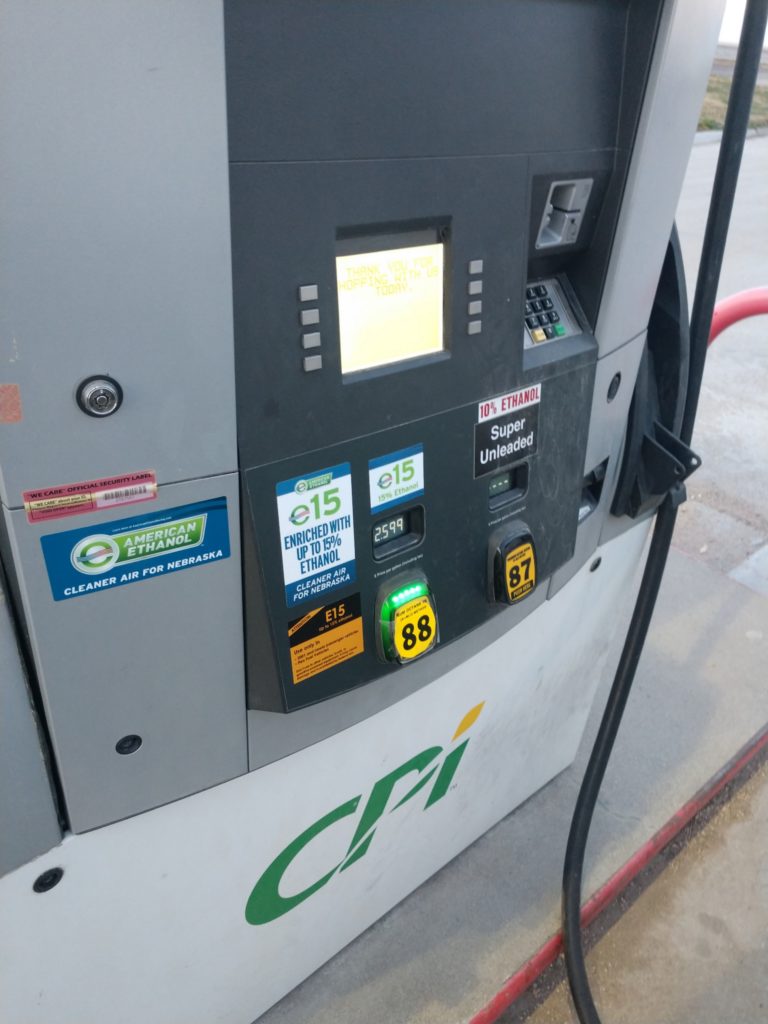 LINCOLN, Nebraska – The Nebraska Ethanol Board (NEB) applauds Cooperative Producers, Inc. (CPI) for adding E15 at their fuel sites in Axtell, Nebraska, and Red Cloud, Nebraska. These additions are CPI’s fifth and sixth locations selling E15 in the state including locations in Clay Center, Funk, Giltner, and Juniata.

“As a farmer-owned cooperative we need to support the folks who do business with us,” said Gary Brandt, vice president of energy with CPI. “CPI uses 500,000 bushels of corn in the ethanol we sell every year, so adding more ethanol to the pumps in Axtell and Red Cloud really brings a sense of ownership to our growers who work hard throughout the year to feed and fuel our country.”

The U.S. Environmental Protection Agency approves E15 for use in vehicles 2001 and newer, and it is currently available at more than 70 stations across Nebraska. Find locations at www.getbiofuel.com.

NEB encourages consumers to consider filling up with E15, a blend of 15% ethanol and 85% gasoline, to save money at the pump, support Nebraska agriculture, and help reduce toxic pollution. The following facts help demonstrate the many benefits of using E15.

“We appreciate Cooperative Producers’ move to add higher blends like E15 because it uses more corn raised right here in Nebraska, which is a benefit for our agriculture economy,” said Roger Berry, Nebraska Ethanol Board administrator. “Using more ethanol also means fewer toxic chemicals in our fuel. Using higher blends of ethanol is a good decision for all Nebraskans. It helps the state’s economy, consumers’ wallets, vehicle engines and the environment. Ethanol’s impact across the country and the globe continues to grow, but it starts right here at home.”

The NEB is urging more Nebraska fuel retailers to make E15 fuel more widely available to motorists. To help fuel retailers learn more about the ease of selling E15, NEB is hosting free workshops across the state. For details, visit ethanol.nebraska.gov. Some retailers have been reluctant to retrofit their pumps for E15 due to misconceptions about cost and installation.

“These locations don’t have a flex fuel pump, but we’re still able to offer E15 by blending it at the pipeline terminal,” Brandt said. “As E15 fuel gains momentum, we believe it will become available at most fuel stations in Nebraska.”

For fuel retailers looking to include higher ethanol blends at their pumps, NEB, Nebraska Corn Board, Renewable Fuels Nebraska, and the USDA are available to answer questions and provide information about grants that can relieve some of the cost burdens.

“We often refer to our industry as the ‘golden triangle,’” said Ted Schrock, district 6 director of the Nebraska Corn Board and farmer from Elm Creek. “We have productive corn, ethanol and livestock sectors, which all work together to boost our state’s economy while providing us with food, fuel and fiber. CPI Cooperative has taken a great step in strengthening this triangle by using a renewable, locally produced product that benefits everyone who likes to breathe clean air while saving at the pump. Our ethanol industry alone has added 1,300 jobs to Nebraska’s economy.”

The Tuesday Fontanelle Final Bell with Brian Splitt of AgMarket.Net